Heavy Sweetness Ash-Like Frost: Translation (Chapter 11.3: Where Does the Origin of Water Lie?) 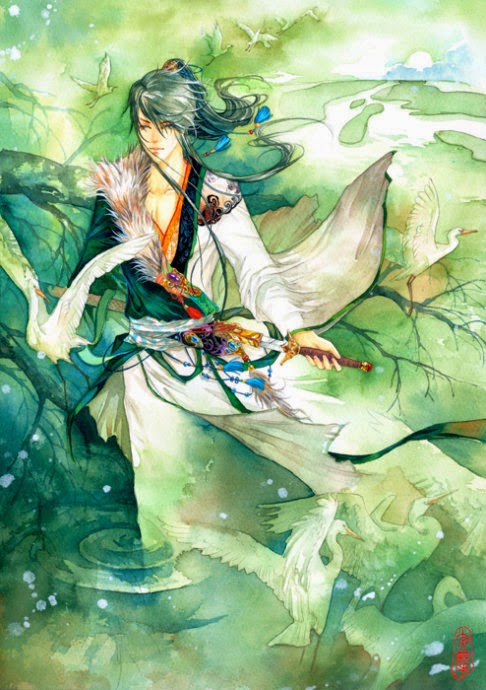 In this chapter, another old favourite of mine appears. Perhaps, not the dream guy some readers might have in mind...

The Water God's long white robes had a silverish tint to it, the thin rain subsided, he stood tall in front of me, the mist was like a veil that came forth. He lowered his head and looked at me, then looked at the Flower Goddess' tomb by the side, his eyes, like a lake that was full, was cool and clear, so clear it was almost sad. 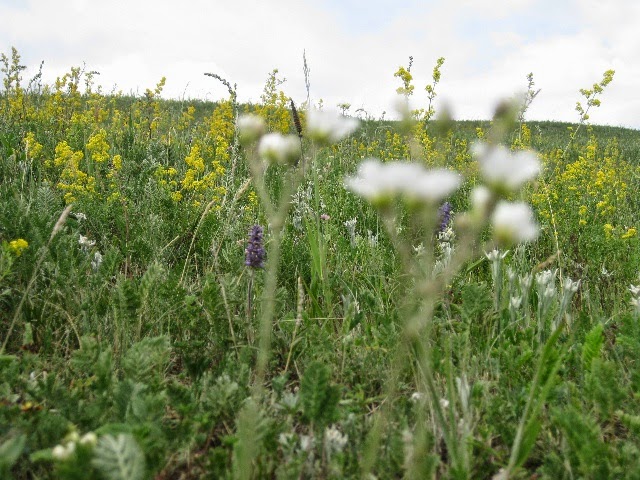 There was no wind and no rain, the thin and tall Deng Xin grass* that covered the entire ground lightly swayed, as if they were all leaning towards the direction of his feet, a very small and light sigh floated from his mouth, the sigh seeped into the light morning mist and could no longer be found**.

He gazed at me, I did not know for how long, it seemed to be as long as a dream, and yet also as  short as a dream.

"Jin Mi Immortal is guarding Zi Fen's burial ground?" Not waiting for me to answer, he continued, "This place was originally a crabapple forest, every early Spring in March they would blossom, it is an extremely dazzling and grand sight. I've always considered it lucky that that night I had returned late, hence I was able to recall back one portion of Zi Fen's soul. But I often regretted it as well, if I did not return late that day, this world will not have Zi Fen, and then she would not have needed to go through so many years of hardship, and then finally her soul completely obliterating..." 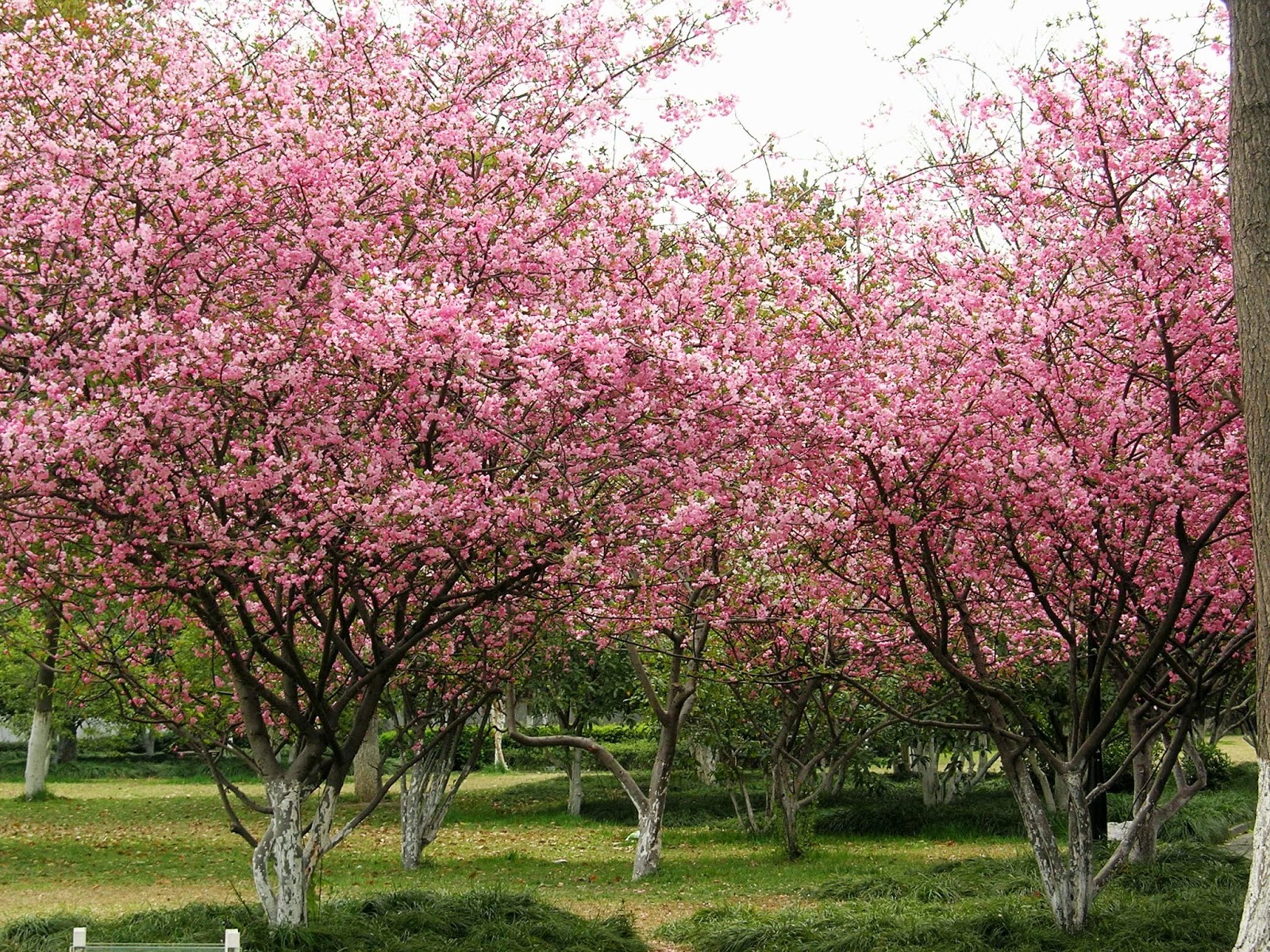 The Water God lifted his head towards the sky, using a clean voice that was free of any smoke, he told a story that I could not understand, "If so, perhaps her soul will be experiencing an ordinary but contented life in the mortal realms, growing old, falling sick and dying, or perhaps she would still be my reclusive but free god living in this Flower Realm... although lonely, but each with their own happiness."

"When Zi Fen governed the flowers, till the end she did not like these dazzling and bustling lively creatures, she was simple and clear her whole life, after searching for one lifetime, she has finally received such a peace." The Water God turned towards me, a water pearl droplet slipped down into his sideburns, "Jin Mi, Jin Mi, the luxuriant flowers were like a beautiful search (in chinese, the words used are Jin Mi which is the same characters as her name)*** for peace, a simple smooth life like the light clouds and the flowing water. When Zi Fen was alive, these two lines that were hung on top of her bed, I had personally written for her."

I couldn't help being shocked, but the Water God stretched out his hand and pulled me up from in front of the tombstone, "I never thought that Zi Fen had left a bloodline in this world, even though it was not from me... however these five thousand years I have not been able to take care of you, how would I be able to face Zi Fen... how to face you..." His words were sad but revealed also a soft joy, he earnestly looked at me****.

I was even more surprised, if even the Water God spoke like this, does this mean I was really borne of the Flower God and the Heavenly Emperor?

As I was wavering, a vibrant green shadow stood dazed near by feet, I turned to look at it, it was a snake.

"Yan You is late, late. May Jin Mi my little bride not blame me." The magnificent Master Pu Chi reached out his hand to warmly pull me towards him, seeing that my hand was in another pair of hands, he followed the direction and gazed up, seeing the owner of the hands, Master Pu Chi immediately straightened his body, arranged his clothes, and sternly and formally paid his respects, "Yan You has been rash, I greet the great Water God."

Water God's bright and clear eyes looked at Master Pu Chi, the water ripples were not happy, "Gentleman Yan You, we have not met for years, have you come to the Flower World to play?"

I couldn't help being confused, Master Pu Chi did not pay his respects to Phoenix but was extremely respectful to the Water God, the etiquette in the six realms really needed some studying.

Master Pu Ch furrowed his brow and gazed down, he said seriously, "I never go around wandering for flowers and asking for willows (formally, he says he does not just wander around, but as willows represents "fallen" beauties such as prostitutes and dancers, the connotation is that he does not seek prostitutes or women loosely)", he continued cheerily, "Today I had received a summon from Jin Mi Immortal, thus I entered the Flower World."

I nodded my head and Master Pu Chi was still smiling.

Hearing this, the tip of the Water God's brows lightly raised, "Jin Mi, you can summon Gentleman Yan You? What incantation did you use?"

Why can't I summon Gentleman Yan You? Seeing the Water God has some suspicion, I felt that he was underestimating my divine strength. Even though Gentleman Yan You from Phoenix's words appeared to used to be a god, but now he was only a small water sprite. It's only natural that I would be able to summon him, so I unwillingly said, " I used a chant to summon the local soil god."

The Water God's expression was clouded, standing in the midst of the shrouding water mist, the sun in the sky was just rising, the sight was clean and beautiful.

Master Pu Chi looked at me and then the Water God, he stated, "So it turns out that Jin Mi is the Great God's relative? That is great! Gentleman Yan You was worried that if I asked for Jin Mi Immortal's hand in marriage I would face some obstacles, but if she is the Great God's relative, then that is the best." Master Pu Chi neatened his black hair, gave me a dazzling smile, his white teeth shone, "We will be relatives that become even closer! Hahaha!"

My whole body trembled, there was no way I wanted to be even closer with a green snake!

Water God's expression shook, he bitterly smiled, "My original self come from nothingness, my passing is but a drop of water, how can I speak of any relatives? But Gentleman Yan You, it was because your mother recognised me as a sworn brother, that is why we have some relations."

The Water God suddenly turned to me, "Jin Mi can summon water?"

I reflected for a moment then said, "I'm not sure, I have never summoned water."

"If you try now, you will know," Master Pu Chi intruded in.

The Water God nodded. This was a good chance to test out the divine strength the Heavenly Emperor gave me, so I pointed to the sky and chanted. Who would have thought that not a drop of water within a hundred "li"***** was willing to give me face. The clouds still floated in the sky, the grass still swayed on the ground,  there was not half a shadow of moistness.

I dejectedly kept my hands, this was truly embarrassing.

"Mu Dan greets the Water God," I was just thinking of what to do when I heard the Flower Leader's voice come from behind. I turned around, I saw the Flower Leader kneel on the ground, seriously looking at me and the Water God, her hands moved in her sleeve, "Jin Mi Immortal has lived since young in the Water Boundary, she does not know about the matters of the outside world, I don't know if she has offended the Water God?"

"Please rise. The Flower Leader does not have to be so formal with me," The Water God returned a gesture to the Flower Leader, "I had only came today to give my respects to Zi Fen, and didn't think I would coincidentally meet Jin Mi Immortal..." In the Water God's gaze flickered by a shroud of mist, "Jin Mi has been protected since birth by the twenty four flower leaders?"

"If my mistress knows that the Water God still remembers her and frequently visits, she will be very content. Mu Dan thanks the Water God on behalf of her mistress!" The Flower Leader must be too old, and was sometimes blur, she answered without meeting the question.

Although the Water God did not receive his answer, he did not correct her, only using a pair of dark eyes to stare at the Flower Leader, as if holding a few threads of anticipation and hope. The Flower Leader's expression showed light traces of guilt from the Water God's gaze.

I lifted my head, truly what a big and black patch of clouds flew at the speed of lightning in the sky, pressing down upon us from above. I suddenly felt a wintry cool air pierced forth, in the ten thousand years within the Flower World it has always been spring, why has the weather suddenly changed today?

Master Pu Chi reached out to grab a piece. He placed it before my eyes whilst casually placing his hand around my shoulders.

*Known as soft or common rush.
** Dian Xian clearly loves the Water God, I find she always puts in a lot of care and details to describe him. Maybe it's because he is someone that does not speak directly of his feelings, his emotions are like the faint water ripples - they appear for a moment and then return to its original state.
*** If you ever wanted to know where Jin Mi got her name by the Flower Goddess :)
**** OMG, earnest Water God - consider me a fan girl.
***** A measurement of distance.
****** In chinese, snowflakes is called 雪花 (snow flower).

Comments: This portion was pretty hard to translate because the Water God tends to speak in riddles. If I was Jin Mi, I would be giving him a pretty dazed look. Haha. I love it when Jin Mi does magic! :)
Posted by Decembi at 12:51