Heavy Sweetness Ash-Like Frost: Translation (Chapter 11.2: Where Does the Origin of Water Lie?) 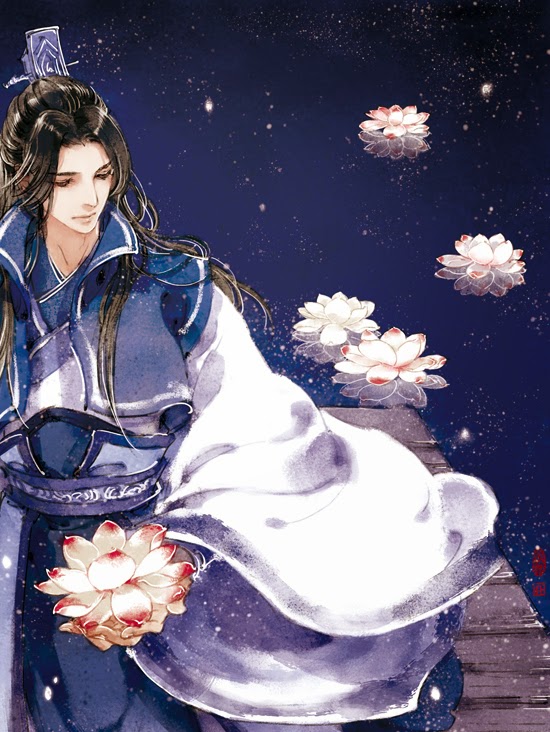 Hello! Taking a short break from my extremely packed work week to say hello! :) I noticed that there has been a HUGE spurt in the love for Heavy Sweetness.

With the exit of a power player, enters another. It's non-stop drama for Jin Mi, no wonder she's confused!

However, was there a misunderstanding somewhere? First, the Flower Goddess was a lily, but I was a grape stem, then again I cannot rule out that the Heavenly Emperor is actually a grape stem; Second, the Flower Goddess' divine powers is on the top of ten thousands, but even after cultivating for four thousand years I have not even reached godhood, then again I cannot rule out that I'm the kind who matures late.

After thinking this way, I was satisfied, but on the surface I revealed a clueless expression, blinking my eyes, softly saying, "If the Heavenly Emperor likes to see flowers, Jin Mi will use all her efforts to plant some, I'm fine even if the Heavenly Emperor wants me to be a little gardener in the Heavenly Realms. But...but..." I furrowed my brows, looking very worried.

The Heavenly Emperor seeing my hesitation, hurriedly asked, "But why? Jin Mi Immortal can be direct with me about any troubles."

"But, my divine powers are low, although I have cultivated for four thousand plus years, I am still a sprite, I know a little about planting flowers, but I need to rely on other objects first before I can transform the flowers, the Heavenly Emperor must laugh at me," I criss-crossed my fingers and moved my body slightly away.

I scrunched my eyebrows and sternly said, "Jin Mi is only a fruit sprite, how can I deserve to accept the Heavenly Emperor's divine essence? Jin Min does not think it is proper."

The Heavenly Emperor affectionately looked at me, "Good child, you don't have to be so distant from me, to give you divine essence is only natural and right in this world."

The Heavenly Emperor stretched out his hand, with just the joining of his palms, there was a strong glow, he chanted, "Rise!" That glow flew out from the middle of his palms, before I could even look clearly, that glow entered my forehead between my brows, a cool refreshing feeling spread throughout my body.

The Heavenly Emperor apologetically said, "I'm afraid your cultivation is not deep, today I can only transfer you five thousand years of divine essence..."

This "only" caused me to be super happy, my heart pulsated so wildly that I missed out what the Heavenly Emperor later said.

"It's ok, it's ok, the Heavenly Emperor is too kind," I dashingly replied.

"I have something to say, Jin Mi Immortal must remember carefully," The Heavenly Emperor was going to send me back, when he suddenly called me, "You and Phoenix or Night must definitely not have any romantic feelings."

I was wondering what it was, turns out it's such a small matter, I said generously, "Oh that only needs a small effort, just a lift of the hand. The Heavenly Emperor does not need to worry."

In the moment that the Heavenly Emperor was in a daze, I had already returned to my body.

My soul adjusted properly in my body, I opened my eyes, the sky outside the window was already starting to brighten.

I heard Yu Lan Flower Leader call, "Jin Mi, have you woken up?"

I couldn't help feeling my head ache. Since I returned to the Flower World yesterday, the twenty four Flower Leaders have arranged to take turns to guard outside my yard at night, and during the day I had to reflect in front of the tomb of the Flower Goddess. The days were truly intolerable, and today was only the second day, but I already felt like many years have passed.

But since the twenty four Flower Leaders were busy with their own matters in the day, they did not watch me, only installing a barrier to trap me within 500 metres of the tomb.

After Yu Lan Flower leader left, I bowed three times to the Flower Goddess' tomb and sincerely murmured, "Fruit sprite Jin Mi impersonated as a descendant of the Flower Goddess to get five thousand years of divine essence from the Heavenly Emperor, may the Flower Goddess not hold this against me, I will respectfully offer more grapes to you."

After a round of repentance, my whole body felt comfortable. Thinking of how I had effortlessly gained five thousand years of divine essence, I felt that anything I saw would particularly meet my liking, even the Flower Goddess' tomb appeared to be shining, in my joy I wanted to find someone to celebrate. But since I could no longer find Phoenix or Night, after thinking awhile, I thought I could only find Master Pu Chi, the snake.

I murmured the summoning chant.

After chanting halfway, the clear sky suddenly started pouring a small bout of rain, someone was walking through the rain. This Master Pu Chi's speed is so fast, even before I finished chanting, he had already reached.

But this person did not touch the ground, his composure was especially distinguished, the rain droplets would go past his body but not wet him, in a grand godly manner, the rain split as he walked.

I looked carefully - it was the Water God!

Now that my divine strength has increased, previously I called a water demon, but now I could call the Water God. Judging by this, I truly am a fruit that has matured late!

Comments: Hahaha, Jin Mi is really cute here. Shameless but adorable. All the power players are pulling out all the stops in this chapter. So, who does Jin Mi belong to? :)