Heavy Sweetness Ash-Like Frost: Translation (Chapter 11.1: Where Does the Origin of Water Lie?) 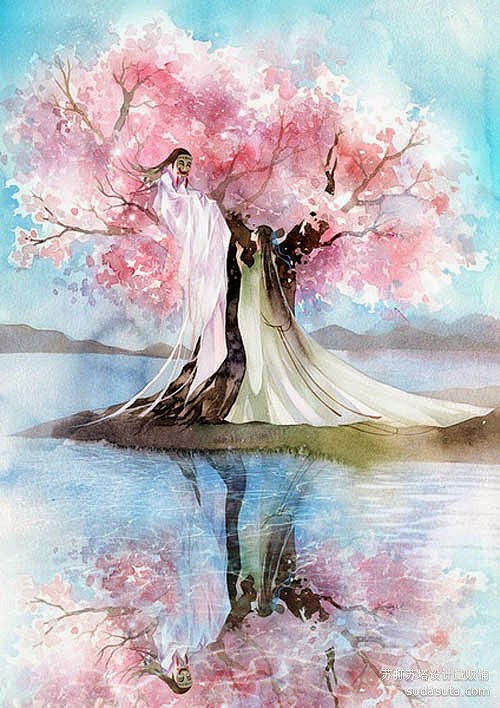 It's always nice to start a new chapter! Dian Xian plots her novel quite carefully so each chapter reveals the secret of its title. :)

This chapter is lighter on the romance, but stronger on the intrigue.

In the midst of Peng Lai God Mountain, the fabled abode of immortals, the floating clouds, the water, the small boat.

In the midst of the seeming and seeming-less cloud mist, a person stepped up from a wooden raft, he gave me a warm smile, "I rashly brought Jin Mi Immortal into this realm of illusion, I hope Jin Mi Immortal will not mind."

I obediently answered, "The Heavenly Emperor is too polite."

After a long while, besides the sounds of nature that softly flowed by, I did not hear the Heavenly Emperor answer me. I lifted up my head, and only saw his pair of eyes concentrating on me, yet it seemed like he did not look at me, but was looking at someone else through me. Seeing me look confusedly at him, he seemed to regain awareness and smiled, in his smile was a few sense of sadness, a few sense of regret and a few sense of anticipation, he answered without fitting the question, "This is an illusionary realm, in the middle of the valley of Peng Lai God Mountain, gods will occasionally roam here with their souls, sometimes the illusionary realm will occasionally appear in the moral realms, the mortals call it 'the mirage of a city by the sea', thinking it's the mirage created by the gas that is spat out from the sky toad in the ocean. When I first heard of it, I couldn't help laughing, thinking that the mortals speak interestingly. However ninety thousand years ago, when I was travelling in the night, I saw a girl walk on water, with each step a water lily is born, with each step she went farther, faintly moving ahead,  in the midst of the fog her distinguished elegant composure unintentionally glanced back. I finally realised what was the meaning of an illusion, what the mortals meant by 'the mirage of a city by the sea'......."

The Heavenly Emperor appeared deeply entranced as he gazed at the mist above the water, lightly breathing out a long sigh.

When one is old they definitely like to reminisce, naturally the Heavenly Emperor is no different from the usual old people, they like to think about the distant past in the middle of the night. Although I was not familiar with the Heavenly Emperor, I may have some relations with him, so I made some effort to chase away the sleepy bug and pretended to be listening attentively with full on interest. But, this "ninety years ago" really made me want to break down, as such a story could not be told finished in just a while.

As I was feeling helpless in my heart, the Heavenly Emperor stopped and did not continue to speak. I pondered over it for a while, this seemed like the opera singers in the mortal world, when they sang an exciting part they would make a pose to solidify the impression, only when the audience cried "great" do they continue on. The Heavenly Emperor's pause definitely was waiting for me to respond before he continued, so I casually smiled at him, "Very good, very good."

The Heavenly Emperor's eyes had a sudden flash, he was dazed for a moment then smiled mockingly to himself, "So alike. In this shrouding mist, you looked exactly like her, but with careful examination the two of you are nothing alike. To say the aura is the same is also a bit pushing it, but this smile is completely different. She didn't like to smile, in the ninety thousand years in which I knew her, she did not smile more than ten times, even if she smiled it was like the morning dew rapidly vanishing, not like yours which is vivacious and young, sweeter than honey."

He suddenly paused, his voice contained sadness and disappointment, "Actually that may not be true.... in the last fifty thousand years I did not see her smile at all. If I.... if she didn't only have a hint of a smile in the ninety thousand years, perhaps she will not have finished her life in such solitary loneliness...."

At first, I thought the Heavenly Emperor was here to recognise his kin, and was preparing my energy to act with him a touching reunion scene with tears, and to also smoothly add on divine essence as a meeting gift. But I did not think that after talking for half a day, he was still talking about someone who had "finished", I couldn't help feeling my spirits dampen, but my expression was respectful, "The King of Hades will protect her, may the Heavenly Emperor let his sadness go."

The Heavenly Emperor was surprised, then continued to smile, he moved his gaze away, and looked at the quiet water, "Fifty thousand years ago, the Heavenly Realms was like this illusionary realm where no grass or flower could grow, but I heard Jin Mi Immortal could casually with one hand create flowers, why don't you plant some green lilies here." For old people's thoughts to jump around so quickly, I thought they weren't many. He truly was the Heavenly Emperor, his conversation topic can suddenly turn to planting flowers?

I looked at the surroundings, from the ground I picked up a cup of soil and tossed it into the water, I murmured a chant. In that instant, blooms and blooms of lilies slowly rose from the water, they slowly blossomed, a stretch of elegant green lilies spread out.

The Heavenly Emperor's gaze was mixed with surprise and joy, "Indeed!" He continued to ask, "Do you know who I was talking about just now?" This old person's train of thought truly jumps around and is very dispersed, but luckily I am smart.

"Jin Mi is young, but I lived for many years in the Water Boundary, thus I know this person must be a flower or vegetable sprite. The Heavenly Emperor's old friend naturally I won't be able to know, thus I will not know who the Heavenly Emperor is talking about, "I explained rationally.

The Heavenly Emperor anxiously looked at me, "The person I am talking about is none other than the Flower Goddess Zi Fen. Jin Mi is around five thousand years old, Zi Fen passed on four thousand years ago, unless Jin Mi Immortal have not even seen Zi Fen before?'

"Never before," I shook my head. The Heavenly Emperor's old age must have deteriorated his eye sight, how can I look like the Flower Goddess, fruits and flowers are essentially two different things, the difference is not just a star and a half.

Hearing this, the Heavenly Emperor's expression appeared extremely tragic, he said, "Who would have thought Zi Fen had hated me until this extent! Even her own flesh and blood, she cruelly would not see......" his voice suddenly stopped.

However, his unfinished words caused me to be struck with thunder, it shook me until my eyes became deaf and my eyes were bedazzled. Following his meaning, I was borne of the Flower Goddess and him! Thinking back of what Phoenix had spoken of yesterday, everything now completely made sense, without a trace of doubt. Yesterday, Phoenix burned the cliff, the flowers and grass were all destroyed, the Flower Leader was furious and brought me back to the Water Boundary with the other flower leaders. We left in a hurry and I couldn't truly understand what Phoenix meant by his words, but hearing the Heavenly Emperor today, I finally understood!

Comments: A notion that is quite commonly found in c-novels (or k-dramas actually haha!) is the idea that the child cannot escape his parent's sin/responsibilities/attachments. An "inheritance" rooted in your identity, so to speak. Maybe, it's an idea that is especially pronounced in the asian context (not to say this does not also exist in the western context) because relationships don't only involve the two individuals but the union of two families into a larger unit.

So is Jin Mi really related to Phoenix and Night? What is the secret behind her mother's relationships and her alleged hatred of the Heavenly Emperor? Where does the Origin of Water lie? :)