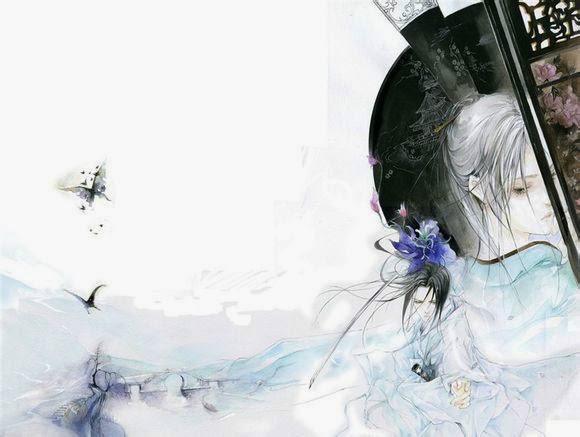 Ok, the web version of Heavy Sweetness has 68 chapters and 5 chapters of epilogues. For Chapter 10.5 of the book, we are around the web version of chapter 31. So, after Chapter 11, we should be exactly at the halfway mark. *Wipes a bead of sweat* whew, this commitment is much heavier than I thought it would be, but the support and comments from readers are also much warmer than I thought it would be, so I suppose everything works out in the end :)

This chapter has a little more childish squabbling between Phoenix and Night over Jin Mi before a secret is seemingly revealed. I like Dian Xian's style of writing because she never gets too dramatic or morose, and the action moves fast. I hate it when a novel just beats to death one secret as if there are no other secrets in the universe, but Heavy Sweetness has many secrets --- Jin Mi's love curse, Jin Mi's Unfeeling Pill, Jin Mi's birth. So even when one is resolved, it merely opens another can of worms.

Sometimes, I feel sad that Phoenix and Night could never really be true brothers. Is it a personality problem? Or, perhaps it's their fate to fight over the same woman?

As I nodded my head and moved half a step towards Night, "Ding Xian, Little Flower Leader, please do not blame Night, Night is a good dragon, I like him."

In that instant, the surrounding people stopped breathing. The old pine tree shook and dropped a pine needle.

"What did you say?" Phoenix's voice was so low it sunk into the ground, each word by each word, his glazed eyes appeared like a perfect porcelain that had been hit by a small hammer, there were cracks everywhere.

"Night is a good dragon, I like..." Before I could finish, the glaze that held cracks suddenly destructed, broken into a chaotic mess, it frightened me into swallowing my last word back into my stomach.

Some sympathy seemed to flash across Night's eyes, there was the glitter from soft glowing stars, but if you observed closer, it returned to its normal quiet gentle attitude, he said to me, "Thank you for Jin Mi's affections, Night also likes Jin Mi."

I smiled appreciatively. The twenty four Flower Leaders' expression became alarmed and angry, the Head Flower Leader's flower tendrils immediately pulled me to her side, she sharply glanced at my eyes, "You and Night?" The wild flora on the mountain trembled until they closed their leaves and petals at her sudden burst of anger.

"Jin Mi..." Phoenix muttered, his expression flickered between alarm and suspicion, deep disappointment and loss, but also a sense of being hit on the head and just regaining his consciousness, "Is what the two of you speak of real?"

Why is this bird so stunned again? I nodded my head and said, "Yes, indeed very real, more real than the pine needles on the tree." The old pine tree shook again, it shook even harder this time, besides the pine needle, some acorns fell.

Phoenix's eyes closed, the mountain wind abruptly became piercingly cold, Phoenix's hair blew up, his face deathly white, woodenly he said, "If so, I had only been a bridge across the river, to allow both of you to meet across the shores..."

The Head Flower Leader flower tendrils' grip tightened and caused me pain, she fiercely cried, "Don't even think of it! As long as the twenty four of us still have one gasp of breath, this thing will never be!"

Yu Lan Flower Leader's face was in great pain, "This is to commit a sin! With the relationship between the two of you, how can your have feelings for each other?!"

To be honest, I was extremely confused, why is everyone more conflicted than the bark on the old pine tree?

In a moment, I was shocked, happy and sad. Shocked because a grape like me, could have such birds and beast as my relatives; happy because no matter what, I can use this to trick for some cultivation pills later; sad because the Heavenly Empress was definitely a hard to deal with step-mother.

To sum up, my present feelings were complicated.

Night was truly Night, he was only surprised for a while and quickly regained his composure, as if he had decided something in his heart, he calmly said, "It's also good we are siblings, it doesn't matter..."

Before he could finish, Phoenix appeared as if he was struck by five thunders, "To go against the laws of nature is to run the risk of incurring heaven's wrath and incinerating one's self into ashes. If his first highness insist on dragging Jin Mi into the un-returnable deep valley of disasters, I will use all my efforts to stop this!"

Night replied, "The second highness may have misunderstood." He turned to face me, "Jin Mi, besides liking me, do you also like the Fire God?"

I thought for a while and reluctantly replied, "I do." Phoenix was confused, the Flower Leaders' body shook unsteadily.

Night asked again, "How about the Moon God?"

Without hesitation, I replied, "I do." Phoenix's expression darkened and the Head Flower Leader relaxed.

Night continued, "How about Gentleman Yan You (Master Pu Chi)?"

I nodded my head, "I do." Phoenix raised his eyebrow, the Head Flower Leader finally released me from the flower tendrils that had held me.

Night laughed, "How about the small attendants at Qi Wu palace?"

"I do." I still gave the same answer.

After hearing finished this question and answer, Phoenix's long eyes were lit with fire, he was furious, the surrounding flowers and trees were set ablaze with fire, suddenly the cliff edge we were on became bald.

I prayed and mourned in my heart for the old pine tree. Who knew that listening to gossip will cost one to pay with their lives?

Comments: Hahaha, I died laughing. As always, the smartest person in the room is Night. The next chapter is quite unexpected!