Hello everyone! Firstly, I like to thank Decembi for hosting me.  I must be a bit loony to start a translation project but what is youth *cough!* without doing a few crazy things right?  HK – this is also dedicated to you for your faith in me, although I am not sure if you will ever get online and read this. 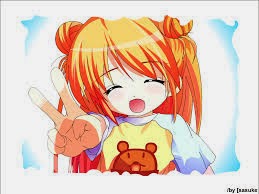 Recently, Decembi posted this thread “Gentleman Free-Floating Cloud by Yu  Qing” (闲云公子) at SSB.  The post brought back fond memories as I remember the female lead Huang Fu Yu very clearly.  She is an exceptionally calm girl – probably due to the grooming/torture under her crazy Sect Leader – and she has a way of avoiding trouble until she has no choice but to face it straight on. It is a lighthearted wuxia story and I hope you would enjoy reading the tale as much as I am having fun translating it.  The book is short at about 10-12 chapters and I think I should be able to manage a chapter or two each week so hopefully you don't have to wait too long between chapters.  Do pardon my occasional grammatical errors and let's get started with the story.

She lifted a silk curtain and walked into a dimly lit hall.

Really, it is such a waste to have poor lighting for such good hall.  Upon the advice of some expert, the candles have been strategically arranged to bask the Sect Leader in an eerie glow when the candlelight is cast on his seat.

“Look Yun-er, what new toy have I got for you!”  Sect Leader smiled as he waved a hand at her.

She walked slowly to his chair and let him held up her little hand. “What interesting toy have Master got for Yun-er?” she replied calmly, with nary a flicker in her eyes.

“You are so young but always act old” Sect Leader smiled.

No, it was not her intention to act older than her age.  Her dream was in fact, to be able to act her age.  According to her research, a normal girl of her age should be learning embroidery or something like that, and not engage in a mental battle with Sect Leader day after day.

When she was standing in front of the mirror yesterday, she spotted a strand of silver on her head.  After thinking about it, she concluded that the silver hair was not a natural occurrence, so it must have been a result of overexertion.

“Look, that is the good stuff I brought back for you.” Sect Leader looked expectantly at her, eager to catch her every reaction.

At the bottom of the marble steps was a young man in white.  He was kneeling and looked rather unkempt.  Actually, she has noticed him the moment she walked into the hall.  She only pretended not to see him as her Way for Life-Preservation.

“An orthodox pugilist who has overestimated his powers when he sneaked into Bai Ming Sect to assassinate me.  He should have died, but I’m a generous man and decided to keep him as a Sky Slave.  Yun-er, I recall that you do not have a Sky Slave yet?

“Yun-er is still young and has no use for a Sky Slave at the moment.”

Sect Leader gave a mysterious laugh: “Yun-er has lost your family since young and lack guidance.  However, you will come to this bridge sooner or later.  Since this young man is quite good looking with a good bone set, you can take him and use him.”

Take him and use him
… from what she know, she is 10 years old this year.  There are many things she need not use and there is no need to force this on her.

A long box was brought to him.  Resting on the red silk lining was a pair of shiny golden bangles.  The bangles are engraved with a snake emblem and attached with a bell.  When worn, the bells will tinkle as the wearer moves.  Although it was a pleasant sound when she heard it along the corridors, this moment has taken a rather dangerous turn for her.  She has no choice but to take out the bangle from the box and smiled “Thank you Master for the bangles.”

“These bangles are engraved with the snake emblem which is worthy of the Huang Fu name.  There is only one such pair in the sect, so you can wear it for him now.”  Like a thorn among cotton, a knife hiding behind a smile, Sect Leader was unable to hide his undisguised glee.

She walked slowly to the steps and looked at the kneeling youth in white.  Although there were some blood stains on his clothes, it could not disguise his distinguished air.  He should be a promising young master from the orthodox sect who had hoped to acquire fame by boldly sneaking into Bai Ming Sect. And meet with a bad end.

She titled her chin and looked at him.  He was bound and the deep cuts along the wrists indicate that he has been struggling for a long time. Which means the ropes holding him would likely break soon.  Although someone has hit his acupuncture points to render him immobile, it was highly possible he still retain control over his legs.  If he managed to strike out her with even thirty percent of his strength, the force would be enough to kill, if not seriously maim a small girl like her.

She looked at his murderous eyes – it was obvious he can’t wait to eat her alive, or break her like a twig.  How could a small girl survive his attack?

Once a Sky Bangle is put on, it can never be removed.  Even if he managed to escape back to the Central Plains in future, he will be mocked and scorned.  It is no wonder this proud youth would rather die than become her Sky Slave.

She can clearly see his antagonism; his strength against her weakness.  Behind her, she can also feel Sect Leader’s anticipation.  With a tiger in front and a wolf behind, here she is, stuck in the middle trying to live.  She, who is just a young girl….

She sat on the steps and asked “What is your name?”

The young man glared at her and said nothing.  She toyed with the snake bangle in her hands and pretended that she did not see his murderous intent.  She continued: “My name is Huang Fu Yun and I will be your Master from today onwards.”  With a click, she has snapped a bangle on her own wrist.

The youth gave a start.  The bangle is part of a pair and should be fastened on his ankles, forever branding him to a life of shame.  Why did she….

She waved her hand and the tinkling sound of the bell rang crisply across the hall.  “This snake bangle is so pretty, how could I let you have all of it?  I will take one, you shall take the other, and that will be fair.  From henceforth, your Master will only be me.  If someone else calls you, you need not answer.”  She finally moved and snapped the other snake bangle over his left ankle.

He did not move and continued to stare at her.  She went back to the Sect Master and said: “Thank you Master for giving me a Sky Slave.  Yun-er will bade her leave now.” She walked a few steps before turning around. “Aren’t you going to follow me.” With that, she walked out of the hall without a backward glance.

The youth got up and chased after her small frame.  Her pace was slow as a snail and with her hands folded behind her, she reminded him of an old woman.  Why was there such a dumb lass in the unorthodox sect who would fasten a Sky Slave bangle on her own wrist?

When he paid more attention, he could hear muttering as her head swayed back and forth. “….. so ask the sage: if the world scorn me, humiliate me, laugh at me, treat me like nothing, treat me like dirt, lie to me, how to handle thus?   So speaks the sage: just one word “endure”.  Let him be, go along with him, avoid him, be patient with him, ignore him, in another few years you will no longer see him…. I shall endure, endure, endure… endure some more…”

You can read about the second prologue “The Second Person”written by Decembi.