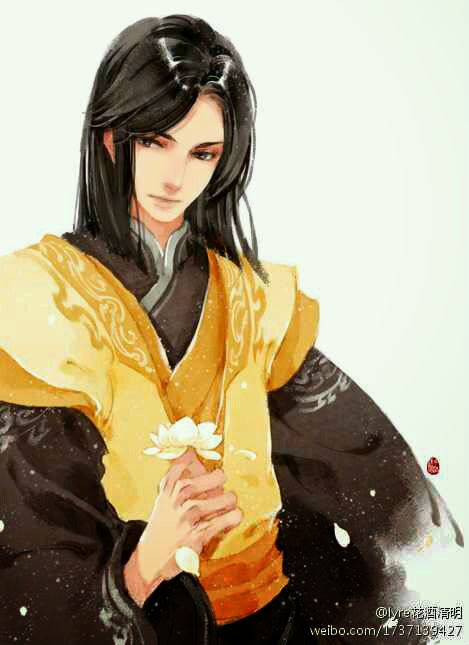 Dear readers, thanks everyone for the super kind comments on my books reviews and translations! I know I should be spending more time translating Heavy Sweetness or Once Promised instead, haha, but it's nice to take a break sometimes and write about something new! Keeps the heart and perspective fresh. Treat these as little sweet snacks between the main meals.

So, basically, the Emperor's Strategy doesn't have a novel plotline or anything - everything kind of develops rather predictably, but the ride is enjoyable because Qing Yao writes as if her pen is on fire.

I've so many scenes I love with Su Li Li and the two male leads that I couldn't choose in the end just a few scenes to translate! So I'm going to translate some of my most favourite scenes for both leads, and hopefully entice more people to read the novel so they can gush along with me! *Squeals*

As stated in my previous summary, the novel starts with Su Li Li finding Jiang Qiu Di extremely injured at the front of her coffin shop. She spends a large part of her savings to get a doctor to heal him.

Scene 1: In which a name is given

After preparing a few delicious dishes, Su Li Li carried the bowl inside the small wooden hut. In the afternoon when the doctor had re-adjusted his bones, he had fainted. This person was extremely stubborn, biting his teeth till the death, but was unwilling to make any sounds, with a flick of his eyes he had fainted. Su Li Li was shocked and almost thought he really died.

Su Su Li placed the bowl down and sat at the bedside. She used her fingers to poke his forehead, "Oi, wake up."

He didn't move, he seems to be dead asleep, the previous blood and mud stains had already been wiped cleaned from his face, he appeared young and a little immature, but his eyebrows were sharp and his lips thin, he had an upright nose bridge. Su Li Li thought in her heart, from his appearance, it looks like his hands can't do work, his shoulders can't carry burdens, but at least his looks are fine, maybe if he is sold to some place he can even be the top draw...

Just as she was about to become immersed in her ridiculous daydreams, that person moved. Su Li Li quickly pushed his shoulders, "Quickly wake up, if you sleep any longer you will starve to death." As the person awoke, he lightly furrowed his brows and his eyes fell open, upon seeing Su Li LI, his expression became calm and cold again.

Su Li Li was very unhappy and scolded, "If it's pain, it's pain! Why must you pretend? You can be the hero that withstands until death, the strong man that starves to death! There is rice and vegetables here, if you have the capability, then don't eat, if not you will have to lower your stature!" She heavily knocked the bowl, carried it up and used chopsticks to pick up the food, the delicious aroma spread.

He bit his teeth and stared at her. Su Li Li responded, "Do you want to eat?"

After appearing to have put down something with great resolve, he lightly nodded his head once.

Su Li Li broke into laughter, "If you keep glaring at me like that, I will not let you eat. Even if you hate me till you bite off your lips, you will still starve to death."

His gaze lowered and he no longer looked at her, only looking at the ends of the bed. His willingness to lower his head now made him look even more helpless than his cold expression earlier. Su Li Li's heart softened and she carried him up, but her mouth muttered, "Only now you know how to lower your head, earlier only asking to be scolded." After placing the pillows behind him carefully, letting him lean halfway comfortably, she carried the bowl up and fed him the dishes one by one with her chopsticks.

The tofu would melt in the mouth immediately, her green vegetables were cut finely, they did not need much effort to be swallowed. The person silently ate, his expression no longer fierce, but was exceptionally silent. After Su Li Li finished feeding him, she put the bowl down, and passed him a handkerchief to wipe. She then passed him water to drink. After he finished, she asked, "What is your name?"

His ink black pupils did not look at Su Li Li but only at an emptiness and did not answer. Su Li Li furrowed her brows, "No wonder you didn't even cry when your bones were adjusted, you are a mute! I wonder what evil deeds you did in your past life, such that you received such bad karma in your present life."

A green vein popped in his forehead, as Su Li Li walked away with the bowl, he suddenly asked  hoarsely, "What is a thin-skinned box?"

Su Li LI did not expect that would be the first question asked from this person. She stood dazed for a moment before she reacted, "It's a thin coffin made from waste materials, one hundred dollars for one box." She swallowed her saliva, "Ah... I truly had no money, it's fine to give one for free..." Because she had said in the morning that she wanted to give him a thin-skinned box, she felt guilty from his question and her voice lacked strength.

"How is my leg?" He asked lightly, still gazing at the bed end.

"The bone is broken, but the doctor has fixed it." Su Li Li replied robotically.

"If the bone is adjusted properly and you rest well, you will not necessarily become handicapped." She followed exactly what the doctor had said, her heart suddenly lurched, why does he resemble the master and she the servant, answering to all his questions.

After he finished listening, he no longer asked any questions. Slowly, he laid down on the bed fully.

Su Li Li paused for half a day, felt something wasn't right, this person doesn't understand, she better say it clearly for him. Su Li Li determinedly walked in front of him, one hand holding the bowl, one hand pointing to herself and said, "Oi, you better remember this. I am called Su Li Li, Li Li like the wild grass that grows on the sparse plains*. I saved your life so I am your benefactor."

He silently looked at her eyes and said indifferently, "I know."

He did not reveal any sense of gratitude. Su Li Li became a little angry and pointed at him and said, "What are you called? Where is your family? What is your family name? Do you have money? Come and ask your family to claim you!"

He closed his eyes and said, "No family, no person, absolutely no money."

Su Li Li looked at him lying down on the bed, she was angry but had no strength, she bit her teeth and said, "Don't think I saved you out of the goodness of my heart and you can eat for free! If you have no money, you will work for me. If you have no name, I will give you one. My yard is full of woodblocks (Mu Tou in chinese), from this day on, you are called Mu Tou!"

She didn't even wait for him to answer, she turned around and slammed the broken wooden door shut as she left.

Comment: Ahahaha, I'm sorry but I just love Su Li Li. I love her kindness and her temper, and how she can't even get the better of Mu Tou even when he is injured!

*This actually comes from a line of a famous chinese poem:
离离原上草，一岁一枯荣
野火烧不尽，春风吹又生。

As you know Su Li Li's father was a very wise man, so he named Su Li Li with this poem in mind. This name is touched on even more as the story goes on, but what the two lines speak of is how the grass that just started growing on the sparse plains cannot be burned out by the fire, they will grow again when the spring winds blow. It's quite touching when you think about it, her father named her with the hope that she will be able to survive anywhere --- always living out there, free and strong.

I also really loved this scene because not only it introduces one meaning to Su Li Li's name, this is when Su Li Li names Mu Tou. For me, naming is a bond that stays with you for life, is an intimacy that is invoked everytime you call that person.

There are many forms of love and affection, some people can spend their whole lives together without knowing each other's names. Naming is a difficult and time-consuming process; it concerns essences, and it means power. But on the wild nights who can call you home? Only the one who knows your name.