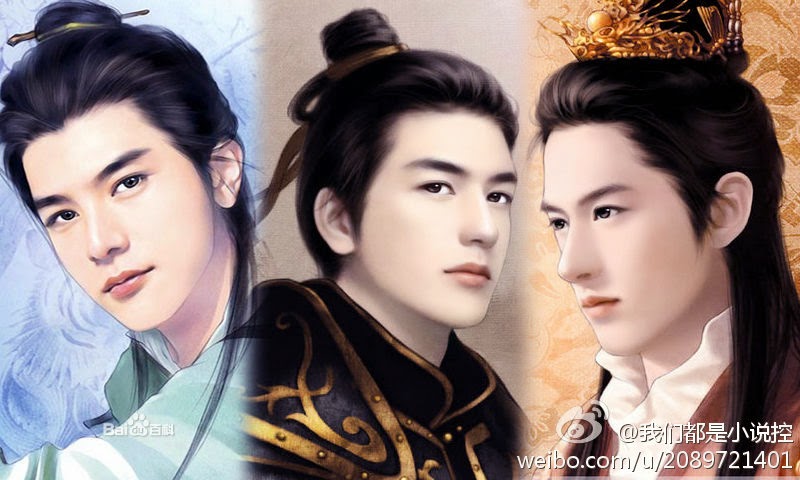 After I read the Crazy Adventures of Wu Gate (see side bar for review), I had wanted to write more about some of the famous male archetypes in C-novels. I just finished The Emperor's Strategy (天子谋), and it made me think of Lost You Forever a lot, though I haven't checked the chronology, I really doubt that it was inspired by Lost You Forever, and more likely that these novelists cleverly use their favourite male archetypes in new and original ways.

I will be writing more about the Emperor's Strategy soon (I can hear peanuts telling me to post the synopsis on SSB haha) on this blog, but first, let me share about three famous male archetypes!

So, if you see the above picture, I would say the leftmost is Yuan Shi Qiong, the middle is Lu Zi Zheng and the right is Prince Duan Yu. The author, Qing Zhao, stated in her weibo that Lu Zi Zheng is the best lover, Prince Duan Yu is the first love and Yuan Shi Qiong is the husband. And, I thought that was quite the perfect description - so don't be too sad if your male lead doesn't get the girl in the end, perhaps their love was just meant to be exactly that way.

But, after reading quite a few c-novels, I would classify the Three Classical Male Leads as (1) The Brother, (2) The Husband and (3) The Lover.

I would use Lost You Forever as the best example of this (holy) Love Trinity. Please don't read this unless you want to be spoiled!

In Lost You Forever, the brother is Zhuan Xu. The person who had always looked after you perhaps in your childhood, or in your weakest most formative years. Some may argue that he could be the first love too - I haven't read the childhood parts in Book 2 of Once Promised so I can't fully judge. I personally prefer Xiao Yao's love for Zhuan Xu to be completely platonic - it's the kind of love you give without wanting to receive. To meet someone and feel that person is your blood and kin, more important than yourself, who understands exactly where you come from, who is basically your root. I think in Xiao Yao's memories, wherever she starts, wherever she begins, it's Zhuan Xu.

Even when Zhuan Xu committed the unforgivable sin, to have become the person she should hate most in the world, it's not that Xiao Yao cannot forgive him, but she cannot forgive herself for not being able to truly hate him. His hands are her hands, his sins are her sins.

My favourite image of Zhuan Xu and Xiao Yao is with Zhuan Xu pushing Xiao Yao on the swing surrounded by phoenix flowers. Ah, to be young again, perhaps that is the purest of feelings. But, perhaps that is so pure, that you can't taint it with anything else - I can help you with all your ambitions, but I cannot be your ambition. I can only always be your younger sister.

In Lost You Forever, the husband is Jing (my dear Jing). Although most readers often find the husband the trustworthy soft "reliable" type, I actually often observe that the husband type is the most cunning - one only needs to look at Ren Feng Yao in Both are Foxes or Yuan Shi Qiong in the Crazy Adventures of the Wu Gate. Jing himself is the head of the Tu Shan Clan who descended from the nine tailed foxes! They are wily creatures whom the other male leads often proclaim to be so smart that luckily they do not want what they want.... which is 江山 (empire). Usually, these male leads have seen through the world, seen through the meaningless struggles of powers, and choose their 爱人 (beauty) instead. Perhaps, they know the secret golden rule of c-novels "If you want to be the emperor, you will lose the girl" (I've only ever read one novel in which the male lead becomes the emperor and gets the girl, though he loses her for most of their prime years. Hah.)

Jing's love is the love that endures. The safe harbour. It's not meant to be tumultuous, but it can weather all storms - be the person who sits quietly next to you, or pushes you when you need to, gently. It is not that you deserted passion or chemistry, but he is the ever constant sun that rises and sets each day, warming you, even as you are the wan inconstant moon. He chooses you, over all else, and you choose him, not because he is the safe choice, or the default choice, but simply because his is the hand you want to hold.

In Lost You Forever, the lover is Xiang Liu. Sometimes, the lover is also the soulmate. The one that burns. That dark flame in your heart that threatens to smoulder all else, incinerate your rationality into pieces. When the two meet, you can hear the crackle, the simmering, that ever precarious gap between their feelings and abyss. Because, to them, to fall is the abyss.

Often, the lover lives by a principle so sharp that he is the blade that cuts you. Is he the lover because your heart hurts? Xiang Liu is Xiao Yao's soulmate, that one person else in the world, whose heart beats in sync with hers. Made up of the same mixture of loneliness and longing, light and dark, love and loyalty, their love is the metallic taste of their blood, so earthy, and utterly them. Only Xiang Liu can eat Xiao Yao's poison, and only Xiao Yao can heal Xiang Liu's wounds.

Xiang Liu can only die for Xiao Yao, and not live for her. It's too late - the boat has passed, forever she sees his past selves and wistfully wishes she had met him earlier. But, his ship has sailed, he will die for General Gong Gong. The last of the Sheng Nong warriors don't dream of returning Sheng Nong to power - for that day has long passed, they only long for the beautiful honourable death of a soldier. So, he gives her the skill to protect herself, crafts the perfect bow for her, saves and protects her lover, and quietly leaves - without wanting to leave any trace of sweetness in her heart, so she won't cry for him. Be happy and carefree, that is all I ask of you.

Some lovers are selfish, they burn too brightly and burn you along with their dreams and ambitions. So, you stay back, go back to the warm sun or the cool harbour. Some lovers incinerate themselves - stay in the light as I descend into darkness.

Some people are sad because Xiao Yao never heard Xiang Liu tell her all he did and his feelings. But, all I see when I see Xiang Liu is that he has always been saying I love you. And, Xiao Yao, as his soulmate, how can she not know? She knows. But, she doesn't pursue. Because some things only spiral into darkness, so she will stay in the light. In the darkness of nights, in the deepest of oceans, dwelling in an all extinguishing blackness, perhaps then you will see the eternal part of her that shall always burn for him.

Email ThisBlogThis!Share to TwitterShare to FacebookShare to Pinterest
Labels: #talk, Both are Foxes, Lost You Forever, The Crazy Adventures of the Wu Gate