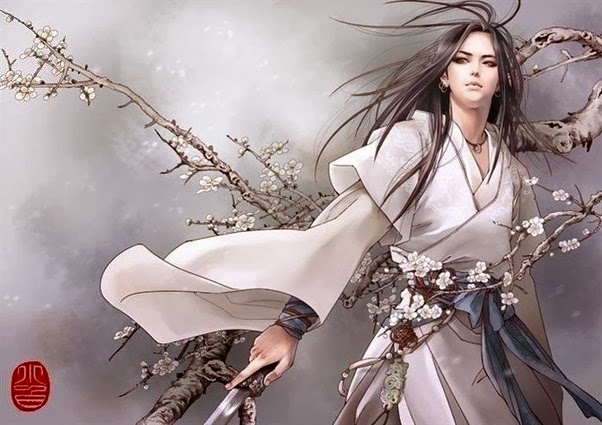 Actually Shao Hao probably appears more elegant than the picture above, but I quite like this image - a man in white robes ruling with one long sword.

Chapter 3: Making a Mistake Because of A Past Fate (Part 2)

Chi You heard something and so tells A'Heng that he needs to go back to his hometown to tell his parents about their engagement and needs to leave her. A'Heng is only too happy and plans to head to the Southeast to find out how Shao Hao looks like. So they part, with Chi You reminding A'Heng his fiancee, that they will meet again. But, A'Heng says it's better if they don't ever meet again.

Two days later, A'Heng reaches the Gao Xing country. The rivers are dry and the lands are infertile. A'Heng feels bad but there is nothing she can do here - this is not caused by someone but a natural disaster, even the gods cannot go against heaven's will.

She walks to a forest deep in the mountain when she comes across a sacrificial ritual being held at an old village. She is shocked as she sees two young girls lying on the sacrificial stage, one is already dead while the other appears to be mumbling something. A'Heng uses her powers to unravel some tree stands and while all the people try and dodge, she rescues the other girl on the stage.

The girl is called Suo Ma, she's the smartest young girl in the village, and was chosen as a sacrifice for the upcoming big war to pray for victory. The villagers are going to go against Shao Hao's army. Suo Ma tells her that they believe Shao Hao's army will help the nobles oppress them and not give them water to drink. A'Heng tries to convince Suo Ma that Shao Hao's army is different and will help them arrange for a water supply. Suo Ma is silent for a while then smiles and say she will believe A'Heng who is a good god. Suo Ma mentions that the trees listen to A'Heng and asks if she practises the wood magic. A'Heng nods her head.

Later, Suo Ma prepares some herbs for A'Heng's dinner as repayment for saving her life. A'Heng feel her body weakened and her divine powers being frozen. It is revealed that Suo Ma fed A'Heng a rare herb that will cause gods who practise wood magic to not be able to practise it and become like mortals.

A'Heng for the first time understood why the Gods not only look down on the human tribe but also were scared of them - not because there were many humans but because in this world there will always be something that can restrict or oppose something else, Heavens have given the human tribe many valuable things to restrict the powers of the God Tribe if they only knew how to use it.

So, Suo Ma knocks A'Heng unconscious. The next morning when she wakes up, A'Heng finds herself tied to the sacrificial stage where Suo Ma was yesterday. She was still unable to use her powers. So, the sacrifice starts and A'Heng feels her blood being drained from her...with her last strength she looks at the blue sky and thinks of her mother, father, brother... the shameless Chi You in his red robes also float before her eyes. She bitterly thinks to herself that indeed they won't have a chance to meet again.

The ritual master plunges a knife into A'Heng's chest and she feels her consciousness turn dark. Just as she was going to be swallowed up by the eternal darkness, she feels her body being carried by a pair of warm hands. An elegant voice says, "Sorry, A'Heng, I came late!"

A soldier asks, "Your Highness, shall we exterminate the rebels?"

"They only did so for their tribe to live, their sins are not theirs, let them return to the village," The male voice hid sadness and pity.

The man used his powers to close A'Heng's divine consciousness and said in her ear, "A'Heng, I am Gao Xing's Shao Hao."

Shao Hao, the Shao Hao she wanted to see... Xi Ling Heng used all her force to try and open her eyes, but her consciousness disappeared in the midst of darkness.

In the late evening, a red-robed Chi You grandly landed from the sky.

Under the last residues of the sun, the old sacrificial stage which was stained with countless fresh blood had a dazzling beauty.

Chi You walked towards the sacrificial stage, he laid in a comfortable position in the midst of the blood that was still fresh. He closed his eyes, and tried to gather Xi Ling Heng's energy from the fresh blood, then used his own divine essence to travel through the ground and living things, to try and find traces of her life.

Until the sky became completely dark, until he had used all of his divine powers, he had searched endlessly again and again but could not find any traces of her energy.

She had really died!

To think one teasing line will become true, they really will not be able to meet again!

As if stroking a lover, he gently stroked the sacrificial stage, letting the fresh blood flow through his fingers, he coldly mocked, "If I had known of this early, I might as well had let you die in Zhu Rong's hands."

He turned his body, and saw the full moon above the tree tops, he thought of the first time he saw Xi Ling Heng - it was also a night where the moon was full. Suddenly, he felt too tired, an exhaustion he has not felt in the few hundred years before, even a dread towards everything on this earth.

He closed his eyes, and fell into a deep sleep in her fresh blood.

In the deep of the night, Chi You woke up, in his nose wafted the deep sweet stench of blood.

He clasped both his fist, placed it on top of his head, and respectfully bowed on the sacrificial stage. He faced the full moon that shone alone in the night, and felt an unending sense of loneliness, why did Heavens let him re-unite with her at Bo Fu Country?*

He closed his eyes and said softly, "Xi Ling Heng, if I knew it would end like this, we must as well not have met again."

The divine essence moved with the flow of her fresh blood deep into the ground, all the trees in the village started to grow crazily, covering the roads, surrounding the walls, sealing shut the doors and windows. The people deep in their sleeps start to awake, they were alarmed at how the entire house was thick with vegetation, and they were still growing at a maniacal speed, what appeared like soft vegetation, had an unyielding energy, they broke cabinets, shattered stools, enshrouded every single person's body, no matter male, female, young or old.

Desperate cries of help rang through the mountain, countless mountains birds felt the horror, and squawked loudly as they flew again, the quiet mountain village become a demonic village. Chi You simply laid on the place Xi Ling Heng once laid, and lazily smiled at the sky.

The desperate cries slowly vanished, and the mountain returned to its silence, the entire village appeared to have completely vanished, only an extremely tightly wound thick vegetation remained.

He jumped onto his special bird steed, and flew off into the sky.

Under the moon light, the entire sacrificial stage appeared to be covered by vegetation from all sides. If you looked from above, you would see a huge green tomb.

Comments: *First, WHEEE, Chi You did recognise A'Heng immediately as the girl he fell in love with in Chapter 1. <3 Swoon.

Also, I thought it was interesting how this chapter already shows how differently Shao Hao and Chi You will react to the same event - the "sacrifice" of A'Heng, Shao Hao acts like a "tolerant" and "wise" king, while Chi You just acts with his heart.

If it isn't obvious by now, I am a total Chi You fan girl. I end up translating all my favourite scenes of him haha!