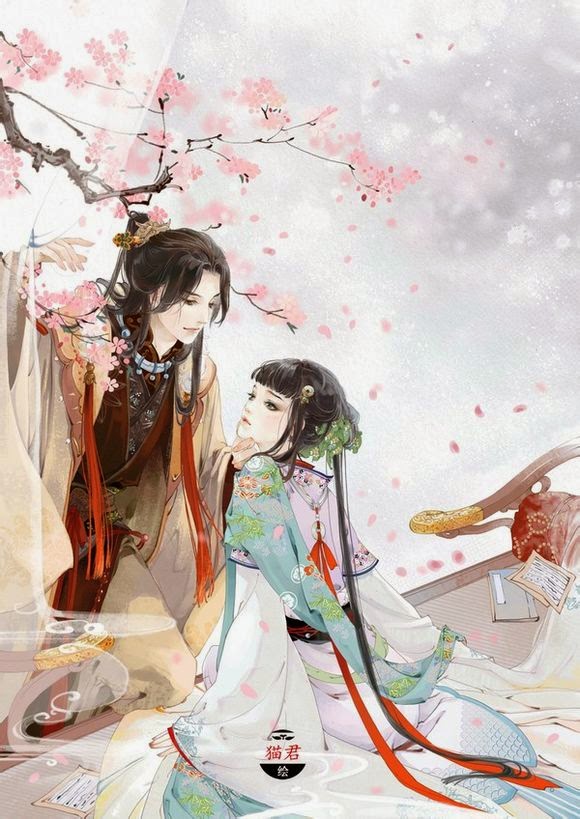 This is one of the best Phoenix and Jin Mi parts in the story! Enjoy <3

"Next time? There will still be a next time?!" Phoenix's face was actually warming up, but after hearing the second half of my words his face started to darken again.

"No, no, there will not be a next time. Whatever you say will be, I will only listen to you, alright?" I spoke in a very cooperative manner to him. Phoenix is quite stingy, I only took three hundred years more of cultivation from him, but he was so angry that he ran away from the banquet to come down to the mortal world. Who knows if he will arrest me for the Heavenly Empress, and bring me back to the Heavenly Realm...

Thinking of this, I shook and trembled.

"Is it very painful?" I felt a heat on my hand, turns out Phoenix held my injured hand and used his other hand to hold a golden needle to pluck out the wooden thorns out of my palm one by one.

Phoenix's eyelashes lowered, and concentrated on my hand. The hairs at his side were blown by the wind, lightly lifting up, then lightly flowing down, brushing passed my palm, tracing threads of ticklishness that itched at my heart*.

My hands had only a few cuts, at the beginning it only hurt a little, but now it didn't hurt so much, but I said in a very obedient way, "Very pain very pain..." Even I didn't know why I was lying to him, just like how I didn't know why he didn't use his powers, but chose to use such an effortful way to remove the thorns.

Phoenix heard this and his brows furrowed. He lifted his head to look at me and hit right into my curious gaze, in that moment a glow shone through Phoenix's eyes.

His grip on my hand tightened, his eyes suddenly closed and he turned aside, his expression dimmed, he said hoarsely, "I was too harsh, I wanted to punish you, but I didn't think... and only punished myself in the end."

Ah? It was clearly my hand that got injured, why does this bird say he punished himself? How unfair.

I fearfully asked him, "You won't catch me to be destroyed by the Heavenly Empress right?"

Phoenix looked at the blood stains on his sleeves and said, "In all the realms, there is only one Great Phoenix Feather Treasure, but I left it for you. Don't you understand?" His expression paled again, with a few strands of dejection, "Even though we are doomed to never be..."

I squeezed the Phoenix feather in my sleeve, who knew that this was such a precious feather, thankfully I didn't throw it away.

Having received such a treasure, I was extremely pleased, and went over and lightly pecked Phoenix's lips. Having realised that male gods liked mutual cultivation just like what the Moon God said, since Phoenix gave me such a precious gift, and I didn't have anything to return, it would be a bit rude, so I gave him some mutual cultivation.

Who knew that Phoenix froze and his cheeks started to redden, but suddenly his expression became downcast, and as before, he held my shoulders and pushed me away at arm's length, then painfully turned his back on me and faced the mountain cliff. The mountain breeze blowing at his robes, he had a feeling of desolation.

Before I could finish, Phoenix suddenly turned around and said, "How can I not like you!" Completely interrupting my "I know, actually you don't like me to mutually cultivate with you?" into half. Alas, alas.

Ah? Suddenly, he doesn't like? Truly always changing his likes and dislikes, but from my examination, his last words, "don't like me" was the truth. So I immediately became relieved and obediently replied, "Yes, naturally I will listen to you."

Hearing this, Phoenix's face turned melancholic, he neatened the unruly hairs on my forehead and lightly asked, "Where's the Phoenix feather** I gave you?"

*This is honestly one of the few times I can sense that Jin Mi, despite the unfeeling pill, likes Phoenix.
** Sometimes they refer to the Great Phoenix Feather Treasure more casually, I've decided to use Phoenix feather, but just remember it's a special one.

Epic! I love it. Awww, Phoenix's love confession and Jin Mi's response... and then Jin Mi's confusion. You don't like me - that's the big truth. <3

For Night fans, Night will appear in the next chapter.