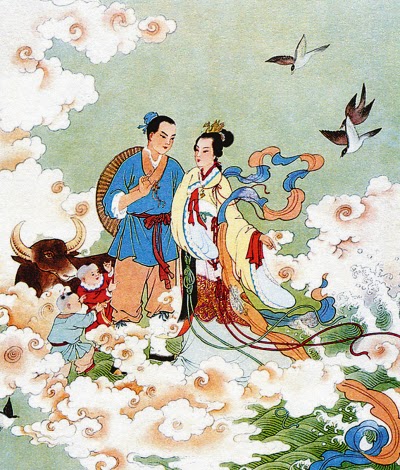 Dear readers of Heavy Sweetness, thanks for your support! Haha, it makes translating that much more fun to think about what will be people's reactions to the story! Some interesting tidbits are revealed in this portion.

I concernedly looked at Master Pu Chi's expression and considerately asked, "Oh, I remember that I had earlier seen a snake, I'm afraid Master Pu Chi had been scared out of your wits?"

"That snake is my real self.*" The magnificent Master Pu Chi proudly revealed a shocking truth, "I didn't know that Immortal Jin MI would have been so struck by my beauty as to be alarmed, I am ashamed, ashamed."

Not alarmed by his beauty, but alarmed by horror as I jumped a step behind, and said imposingly, "You! Don't come over! I am sour, unripe and immature, don't eat me..."

Master Pu Chi was dazed for a moment then took a step closer to me. I trembled and closed my eyes.

Master Pu Chi picked up a stray hair from my forehead and sniffed it under his nose, he said intoxicatingly, "Relax, I, Yan You, have always only robbed beauty and not lives." Master Pu Chi steadfastly glanced at me, "What more Immortal Jin is such a beautiful grape, to eat it is a waste, it is better to keep it to give birth to babies."

Give birth to babies?

Ah, this I know, the Moon God said that after the male and female mutually cultivated, a baby will be born. Thus, Master Pu Chi wanted to mutually cultivate with me, but he said it in such a convoluted way that I could not understand.

I carefully examined Master Pu Chi and swiftly said, "I do not want to give birth to babies with you."

Master Pu Chi paused again, then asked softly, "Immortal Jin Mi's meaning is that if we don't give birth to babies, you agree to mutually cultivate with me?"

I reflected for a moment then looked at Master Pu Chi's swift and agile figure, his divine strength should be greater than me, if I mutually cultivated with him perhaps my own strength will increase, I nodded and said, "Yes."

To have a snake hold my hand, I was extremely uncomfortable, so as I was going to take back my hand, I heard an icy cold voice come from the back of my head, "I've only heard of Gentleman Yan You being sick of being a god so he came to the mortal world to be a sprite, but who knew he didn't even want to be a sprite, and was thinking of incinerating into ashes?"

Phoenix materialised out of thin air and appeared in between us. He furrowed his thick brows and his eyes lightly swept over Master Pu Chi's tight grasp over my hand, his face was expressionless, but even his hair was shrouded in a frosty air.

Based on my experience in the last hundreds of years, this mercurial bird was not happy again. I immediately obediently gave him a smile, but who knew he returned me a cool gaze instead.

Master Pu Chi held my hand tightly and shook out his robes, "Presently, Yan You is neither a god nor a demon, belonging to none of the six realms, with no obligations and no responsibilities, in what name will Phoenix incinerate me into ashes?"

Phoenix coldly smiled, a glittering gold light in his palm, he said with no haste, "Based on my divine strength, I do not need any name, to incinerate Gentleman Yan You is but a mere lift of my arm."

Before he finished, the bubbles flowing in the stream burst, the water of the temperature started rising and started to boil, the surrounding carefree multi-coloured fishes started to flip over to reveal their white bellies.

Master Pu Chi shook all over and then pouted his mouth in grievance, "Violence! Violence! To think such a despicable person has been produced from the Heavenly Realms! You dare threaten me!"

Holding the golden light in his hands, Phoenix gave a side glance to Master Pu Chi, "I only wonder if Master Pu Chi is willing to accept my threat?"

Master Pu Chi gave a long sigh and unwillingly loosened my hand. With a face full of woe, he told me, "My little bride Jin Mi, the world is jealous! To think of that time when they similarly separated the Cow Herder and the Weaving Goddess**! Although our hearts are one, we are being torn apart," He continued determinedly, "But, rest assured, after I have cultivated some more I will come and take you back! To wipe away today's humiliation!"

Phoenix raised an eyebrow towards Master Pu Chi who was still continuing with his promises, the golden light started to shine in his hand, and Master Pu Chi immediately closed his mouth. With a flick of his finger tip, I was locked to Phoenix's side, he kept his golden glow and chanted, "Rise!"

I felt a gush of wind flew past my cheek, Phoenix must be carrying me out of the stream. I could still hear Master Pu Chi's voice shouting, "Immortal Jin Mi if you ever miss me, just say the chant and I will come! Anytime anywhere with no regret or complaint!"

Phoenix's expression darkened and the heavenly locks tightened around me until I could not move, and with another hand he sent a ball of light into the water. I could hear Master Pu Chi crying, "Phoenix! You dare destroy my roof!"

Phoenix acted like he did not hear anything with his steely face, he carried me on a cloud and flew for quite a while, finally he placed me on the edge of a cliff. I almost slipped but luckily grabbed an old pine tree and managed to stabilise my feet. I suddenly felt that my palm had a searing pain. I loosened my hand and looked, it turns out that I had grabbed the old pine tree too tightly and my palm had gotten a few small cuts with the peeling of skin, it was so painful that I had to let go.

At the side, Phoenix stood upright with his hands behind his back, he coldly looked at me as I blew on the palm of my hand, a softness flickered in his eyes for a moment and disappeared, his fingertips moved as if he wanted to reach out to grab me, but then stiffly kept his hands.

I raised my hand and concentrated on the patch of redness that was slowly rising, in my heart I silently cursed Phoenix one hundred and eight times. Just now, I adapted with the circumstances and lowered my head so I could gather some tears in my eyes, then I weakly raised my head to look at him, using my injured hand to timidly pull at his sleeves, and also take the opportunity to wipe the little blood drops on it, I said softly, "This time it's my fault, I will be more conscious next time. Could you not be angry?"

Comments: Haha, Jin Mi is not only shameless, she is sly! Haha, I must say that I still heart Phoenix a lot, even if I'm constantly sighing for Night.

*Yes, Master Pu Chi whose real name is Yan You, is actually a snake. Can you guess from where? Haha. I did not want to spoil it earlier, but now you can see that Phoenix did not magick a snake in the palace, but had sent a hot flicker to Master Pu Chi when his arm was around Jin Mi, and this caused Master Pu Chi to reveal his real self. I found it interesting that Dian Xian classified Master Pu Chi as belonging to the water element, since a snake is traditionally considered as "yin fire".

** The Cow Herder and the Weaving Girl/Goddess is one of the most famous Chinese folk-tales and is an embodiment of the greatness of love.

Here is one variant of the story:

Many many many years ago, there was an orphan who herded cows. His older brother's wife treated him badly - she gave him nine cows and told him to bring home ten cows or he need not ever return. However, he received help from a wise sage, and found a sick old cow on a mountain. Under his care, he realised that this old cow was the Taurus constellation that had been sent down to the mortal world. So, the Cow Herder successfully herded him and could go home.

Under the guidance of the old cow, the Cow Herder found the bathing place of the female goddesses in the mortal world. The Cow Herder took one of the robes and this belonged to the Weaving Girl/Goddess. They met and fell in love, and even gave birth to twins. However, as the Weaving Goddess broke the rules of Heaven in falling in love with a mortal, she was taken back to the Heavenly Realms. The old cow told the Cow Herder that after he died, the Cow Herder can use his skin to make shoes and he will be able to ride clouds and control the mist, and he managed to fly up to the Heavenly Realms. Upon the point of his reunion with the Weaving Goddess, the Heavenly Empress used a hair pin to become the silver river and blocked his way. The magpies in the sky were touched by their love and so made a "magpie bridge" and allowed the Cow Herder and Weaving Goddess to unite. The Heavenly Empress was a little touched, so she allowed them to reunite on every seventh day of the seventh lunar month at the magpie bridge.