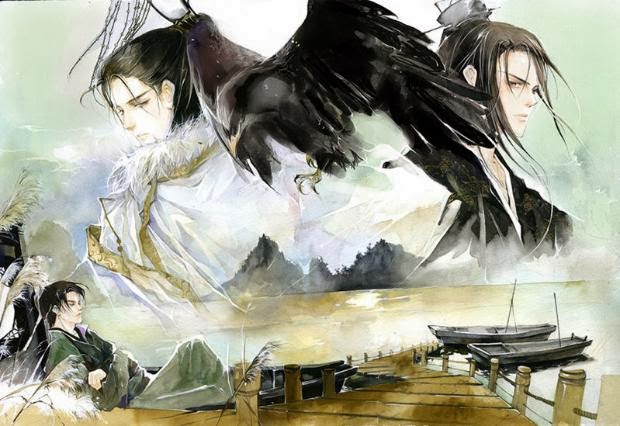 Just came back from a close friend's wedding and I feel immensely satisfied and touched --- I always get moved by what I see as fundamentally a simple and yet difficult promise, to have and to hold from this day forth. So, in celebration of all kinds of love, here's the start of Chapter 10 of Heavy Sweetness!

"What did you say?!" Two sharp rays shot out of the Heavenly Empress' eyes as she fiercely cried.

"You... I never..." The peacock goddess' face was all red, but compared to his second highness, some noises came out of his open mouth but it was not clear what he was trying to say.

Phoenix's face was also completely red and one wonders what he had in his mouth, because both of his eyes were watering and he looked very pitiful. I kindly passed him some tea, "Your second highness, please drink some water to moisten your throat." Who knew that after what I said, he started to cough more seriously.

"You wild spirit, how dare you say such nonsense in this palace hall! How dare you try and taint the prestige of my Heavenly family!" The Heavenly Empress slammed the table with one palm, and agitatedly rose, "Thunder God! Lightning Goddess!"

A male god as black as charcoal and a female goddess who was shining all over came from outside the two rows of palace guards.

I was alarmed, this Heavenly Empress is a little too vicious, when everything was going well she suddenly called for the Thunder God and Lightning Mother to strike me dead!

"Wait!" Phoenix raised his hand and blocked me from the front, but the sound was composed of five strong voices. At this point when my life wavered between salvation and death, I identified these voices - they came from the Heavenly Emperor, the Water God, Night, the Moon God and Phoenix.

"Today is Mother Goddess' Birthday Banquet, the whole realm joins in celebration, to easily destroy a life is not very appropriate, I ask Mother Goddess to reflect three times!" Phoenix no longer choked but very smoothly rose and bowed towards the Heavenly Empress. It's rare for this mercurial person who changed moods quickly to speak up for me.

"My son speaks wisely. Immortal Jin Mi comes from the Flower World, she must not know the ways of the outside world, the unknowing has no sin," the Heavenly Emperor echoed. To think that this old man also has a kind heart.

The Water God's expression quickly changed and before he could speak, Night stood up, "If the Heavenly Empress wants to punish, please punish Night instead. Immortal Jin Mi is my close friend, if it was not for me who mentioned the Heavenly Empress' Birthday Banquet, Immortal Jin Mi would not have become interested and attended the Banquet. I will take full responsibility for this."

"Ah?" The Heavenly Empress' coquettish eyes swept over my head, "I see that these hair pins are a pair, so this little demoness is the giver of the stem you mentioned? If I did not remember wrongly, Night said that your close friend did not attend, so was that a lie? If you want to help this little demoness shoulder the blame, two crimes will have to be punished, Night, you will have much to shoulder then."

Night stood up and bowed, he said, "The Heavenly Empress can punish, I will not have a word of complaint!" His tone did not have a single sense of hesitation. Truly loyal!

The Heavenly Empress' eyes rose at its ends, she pluck out a golden hairpin and made a sharp stroke, a white light dashed towards Night with lightning speed. The Heavenly Emperor wanted to raise his hand to block it but he was not fast enough.* Looking at Night, he did not move a blink, not even to close his eyes as he stood to receive it. The blade of light moved rapidly, I had no chance to even react when the light suddenly curved halfway, jumped over Night, passed over Phoenix, and edged towards me.

In that intense moment between life and death, I could only see a golden mist flow out from my robes, and suddenly a wall of light helped me block that blade of white light.

"The Great Phoenix Feather Treasure? Phoenix, you!" The Heavenly Empress was alarmed and her face whitened.

In that midst of chaos, my gaze fluttered and I suddenly felt that the surroundings had a huge change, and I did not know who cursed me to return to my real self. In that moment of darkness, I felt a palm lift me up.

When I could see light again, I suddenly saw Master Pu Chi who had disappeared for a while, he was holding me and riding a cloud of mist and rapidly flying forward. Behind us, the heavenly soldiers were holding knifes and swords, and riding the wind to chase after us. Master Pu Chi swiftly rode over the Southern Sky Gate, the more he flew the faster he got, two gushes of evening wind furiously blew passed, and in that moment the heavenly soldiers were completely thrown back and disappeared without a trace. Master Pu Chi carried me to fly over the Heavenly river, we entered the mortal world, and with great force, landed in a small mountain stream.

I felt the feeling of wet coldness, but my whole body was not touched by a single drop of water. I focused and saw that in the middle of the mountain stream was a building, it did not lack any carvings or paintings, and in fact was as grand as the Dragon Palace in the East Sea.

From Master Pu Chi's palm, I slid down and returned to my human self, I flipped out my robes, and shining water bubbles spread out from around me, but my clothes were not affected by the water. I raised my hands in a respectful gesture to Master Pu Chi, "Many thanks to Master Pu Chi, you saved me in the nick of time. Who knew that Master Pu Chi was so skilled? I am truly impressed."

Master Pu Chi waved his robes, "Ah, I have not used this Rapid Shifting Fog Chariot skill for a while. Using it today, who knew that it has become even more brilliant! How would the heavenly soldiers be able to live from now on!" He painfully continued, "Ah, it's lonely and cold at the peak, how lonely and cold I am."

I paused and persuaded him, "Don't be sad, Master Pu Chi, it's better to be modest as a god."

Master Pu Chi shook his head and appeared unmoved. He moved his hands behind and said seriously, "False modesty causes a person to grow fat."

A wave of light spread through the midst of the water bubbles, Master Pu Chi quivered his sparkling eyes, "What does Immortal Jin Mi think of my Brilliant Vapour Water Residence?"

"Very good, very good." I nodded my head, "This house has everything that is important."

Hearing this, Master Pu Chi gave a sigh, "But while the house has everything, it does not have all the persons required."

"Ah, does Master Pu Chi lack some followers?" Since Master Pu Chi's place is grand, it appears that he would like some entourage to be at his beck and call.

Master Pu Chi looked me up and down intensely, with such a deep gaze that I felt goosebumps all over, "Servants I don't lack, I only lack a wife." He spoke with deep affection, "Why don't Immortal Jin Mi become my residence's mistress!"

Comments: Ahahah, what has Jin Mi got herself involved with again!

*Did anyone find it weird that the Heavenly Emperor was slow? It suggests that Master Pu Chi was the smartest person in the room at that point haha.

As I've previously commented I quite like Master Pu Chi as a character, and you will probably be surprised with his back story later.

But, let's swoon first --- Night standing up with no hesitation to take Jin Mi's punishment and Phoenix giving Jin Mi his greatest treasure to shield her from all dangers!!!

Awwww... how does a girl choose?