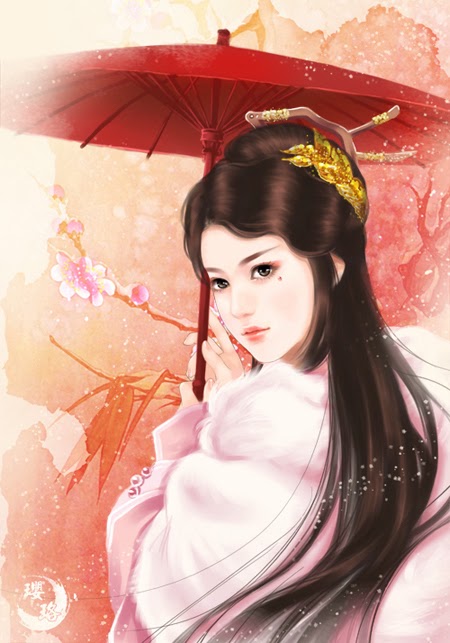 Double update! I thought it was about time we wrap up the birthday banquet and get the story along haha. I also felt a bit bad as I toggle between Once Promised and Heavy Sweetness - it's like Ah Nian and Xiao Yao, you are the father of two children and you don't want to play favouritism to either!

Some answers to queries I have had:
(a) The book version has 24 chapters, the ending and epilogues. The internet version does not have the chapters collated yet into 24 chapters and are updated exactly like my updates - there's 68 chapters, the ending and epilogues. We are now at chapter 29 of 68, so slightly more than 1/3 and will soon be at the half-way mark. I'm following the book version posted online for as much as I can, and will be ordering the real book.
(b) Why are they shocked to see Jin Mi? Jin Mi is the splitting image of her mother, the Flower Goddess, who passed away 4000-5000 years ago. She also infamously hates the Heavenly Emperor and the Heavenly Realms so it would be pretty much impossible for her to attend the Heavenly Empress' Birthday Banquet.

"It's so tiring to speak while standing up, " The Moon God moved forward and whispered towards the Heavenly Emperor and Heavenly Empress, "Sister-in-law's heart in finding a wife for Phoenix, I can also understand, but this lady has a thin skin, one must speak carefully, understand?"

Not caring about the strange looks on the Heavenly Emperor and Heavenly Empress, the Moon God happily pulled me towards the seat between Phoenix and Night to sit.

Since I can finally sit down again, I was happy and smiled as I sat comfortably, I smiled at Phoenix, then smiled at Night.

After this round of smiles, I felt that the surrounding was not right, minus the concerned and suspicious glances from the Heavenly Emperor, Heavenly Empress and Water God, all the male gods were looking at me as if they were intoxicated, while the female gods were looking at me angrily until I felt that I had thorns all over my body. Phoenix coldly gave a huff and waved his sleeve, while Night placed his tea cup on the table.

"May all the gods not be too polite, today I have prepared wine and dishes, may everyone fully enjoy them," The Heavenly Empress said pleasantly and broke the strange atmosphere in the palace.

The peacock goddess elegantly read out the couplet.*

"Good, good, good. Truly a filial girl!" The Heavenly Empress nodded her head and was extremely satisfied. She turned to the Heavenly Emperor and said, "No wonder in the mortal world, they all say daughters are close to the heart, I think this is very true. If Phoenix is half of Sui He, I will be content."

The Heavenly Emperor nodded his head in agreement, but his heart did not seem to be in it.

The Heavenly Empress turned again to the peacock goddess and said, "Sui He, you must come to the Heavenly Realms more often, we were after all once from the same tribe."

The peacock goddess closed her hands obediently in a gesture to indicate "yes".

"You must not have seen Phoenix in a while," The Heavenly Empress looked at where the peacock goddess was sitting, "We are one family but you sit so far, it seems too distant, why don't you sit next to Phoenix? It will be more convenient for me to talk to you as well."

"Yes," The peacock goddess drank the wine she used to praise the Heavenly Empress and thereafter elegantly sat next to Phoenix. I admired her from behind Phoenix's head and thought, not bad not bad.

After all these to-ing and fro-ing, my stomach was hungry, and so I turned all my attention to the food in front of me.

The peacock goddess was true to the Heavenly Empress' wishes and turned to speak to Phoenix in a low voice, Phoenix would also reply her every few sentences.

"Your Majesty, look at Phoenix and Sui He sitting over there, don't they look like the people in the painting in my room? The summer rain falling down, a loving couple under the umbrella. I still remember the name of the painting, it's called "Zhu Lian He Bi (Excellent Combination)**". I was eating happily but hearing this from the Heavenly Empress, I slowly stopped.

Peacock goddess' face reddened and she said coquettishly, "Auntie is teasing Sui He."

Phoenix furrowed his brow, his sharp nose bridge scrunched up a little to show wrinkles.

Zhu Lian He Bi? This sounds familiar, I remembered that in the books the Moon God passed me there was a painting called "Zhu Lian He Bi".

The entire hall was silent.

*The couplet is rather complicated and I rather not translate it since it does not have much relation to the story.
** Zhu Lian He Bi means an excellent combination - the pearls are strung up together with the jade. An excellent person paired with excellent stuff.

Comment: AHAHAH, I love Jin Mi foot in the mouth syndrome.
Posted by Decembi at 11:03