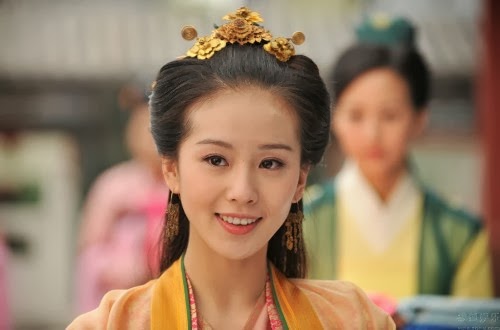 Here's a picture of Liu Shi Shi that I really like. I agree out of all the current actresses, I find Liu Shi Shi most suitable for Jin Mi, but mostly because her face has a natural beauty and doesn't appear to have any plastic surgery. Quite a few of the young chinese actresses appear to have done something to their faces, which makes it uncomfortable for me when I watch them act haha.

"I'm late, late!" In that moment, a blushing figure rushed in from the palace door. Seeing the unmoving gods, and following their gaze towards me, he confusedly examined me for a moment, then appeared suddenly enlightened and cried, "Ah! Isn't this Zi Fen from the Hundred Flowers Palace? Truly such a beauty, getting more good looking each time."

Once he finished, all the gods were surprised, whatever they held in their hands - cups, fans, chopsticks, all fell towards the table.

Even if I had a strong resolve, I also felt faint, and pitied the gods in the hall - if I had just seen someone who is supposed to be comfortably sleeping in the grave jumping lively in front of them, I would also be surprised. The Moon God's vision and memory is getting worse each time.

I walked out of the shadow and stood in front of the Moon God. I corrected him kindly, "The Moon God must have seen wrongly, the Flower Goddess has long passed away."

The Moon God scrutinised me closer and suddenly smiled, "Ah, so it is Jin Mi! When you were standing in the dark, I could only see an unclear silhouette. My memory is bad, I can only remember that Zi Fen was incredibly beautiful, and forgotten there was also a Jin Mi. I deserve punishment," He spoke intimately with me as he grabbed my hand and turned me towards the palace front.

Under the glow from the stars in the glass boxes, I could see the strange yet despondent expression on the Heavenly Emperor's face slowly change as he saw my face from the front - it became an expression of shock and suspicion.

Then looking at the Heavenly Empress, what was at first an expression of alarm and helplessness, quickly changed to deep suspicion when she saw my face in the light.

Phoenix sighed* and grabbed the hair at his temples, Night's face was inscrutable.

The Water God dazedly looked at me, the white jade cup in front of him had fallen and smashed into pieces, they sadly laid in front of him in a pool of wine. At his side, the regal Wind Goddess was curiously examining me.

Seeing this group of gods, I immediately felt sad, it turns out that my looks are so alarming, no wonder the Flower Leaders always wanted me to wear the hair pin to shield my looks.

The Heavenly Emperor and Water God spoke at the same time. No wonder they are future parent in laws, they have such good chemistry**.

I smoothly shook my sleeves and clasped my hands together, "I am Jin Mi. Greetings to the Heavenly Emperor and Water God." After speaking, I realised I was no longer appearing as a man, so I awkwardly kept my hands and made a feminine gesture.

After speaking, the bird tribe immortals started discussing rapidly, "Jin Mi? Is that the sprite that caused our tribe to shoulder unjust shame?"

"At which place does Jin Mi cultivate as a god now?" The Heavenly Emperor asked half anxiously and half in fear. He appeared to have anticipation and yet feared disappointment at the same time.

This expression was identical to the Water God.

As I was about to answer, the Moon God excitedly helped me, "Big brother, you are a bit ignorant, Jin Mi lives at Phoenix's palace. Speaking of which, it can be said that Phoenix brought her up, and she was Phoenix's book boy for a while."

I looked at the sky, and Phoenix continued to press his forehead. The Heavenly Emperor was confounded, the Water God was dazed, this appeared to be completely unexpected.

The gods gossiped secretively, "Book boy? Is it the book boy who seduced Phoenix and also has unclear relations with Jiu Yao Xin Gong?"

The Heavenly Empress looked at me coldly and asked Phoenix, "Where did you find such a beautiful goddess?"

Phoenix gave me a deep glance, revealing some hesitation and worry, as if he had a thousand things to say but could not be expressed.

The Moon God happily replied, "Jin Mi was allegedly picked up by Phoenix."

"The Moon God has got it backwards, his Second Highness was picked up by me," I rebutted, and decided to gain some credit in front of Phoenix's parents, "Speaking of which, I am sheepish to say that the incapable me had saved Phoenix's life twice."

"Yes," It was rare that Phoenix was so honest.

"If so, the Heavenly Emperor and I need to thank Jin Mi Immortal for saving Phoenix," The Heavenly Empress spoke of gratitude but her eyes remained cold.

"It was no strenuous effort," I said courteously. Phoenix narrowed his eyes at me, as if he was displeased.

"How did Jin Mi Immortal pick... erm, meet Phoenix?" The Water God asked looking at me determinedly, as if he wanted to find out something.

"Ah, at the Water Boundary (Shui Jing)," once I said it, I immediately regretted it, thinking of how the Flower Leaders are trying to capture me back. After revealing this at the palace, my route is completely exposed.
"The Water Boundary!" The Water God's voice deepened and he grabbed the edge of his sleeve tightly, as if he was shaken as a whole. It was rare for such an indifferent god with no wants or desires to be so emotionally disturbed. It is not clear how good Night's father-in-law's relationship with the Flower Leaders are, hopefully he will not betray me.

This Heavenly Emperor is so unkind, with one question he has hit my sensitive spot - one, I was not a flower, two, I have not cultivated to become a god.

"No," I said after calming down and said reluctantly, "I am a fruit sprite."

Comments: Haha, I really died laughing translating this chapter. Jin Mi rocks.
*I have some pity for Phoenix here for loving Jin Mi.
**If Jin Mi only knew what "good chemistry" the Heavenly Emperor and Water God had!
Posted by Decembi at 20:03