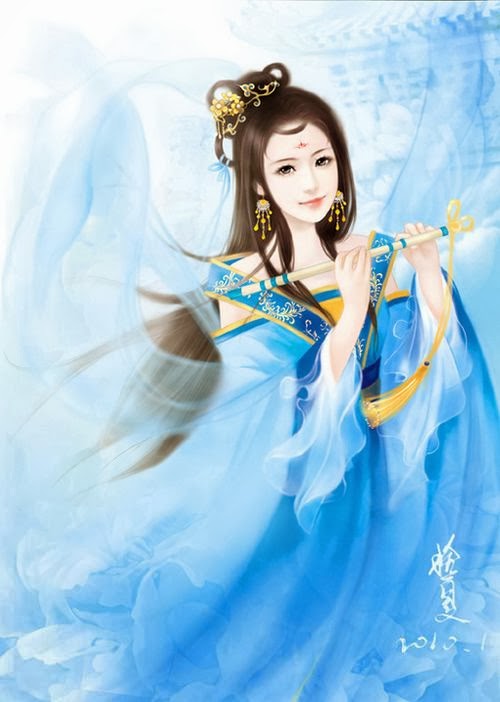 My dear readers, here's your weekly dose of Heavy Sweetness (and what a lovely dose it is after all the emotional upheavals of Once Promised and Lost You Forever). Yes, I'm going to summarise and translate favourite scenes of Once Promised, but Heavy Sweetness is still the only official translation project I am doing. Translations are a lot harder than summaries so you will only likely get a translation weekly - the thing about translations is that you got to translate everything, the parts you like and the parts you don't really like so much (haha), hence it's slower for me because I want to enjoy the process and not have it become a burden. So, Once Promised is not affecting my translation pace for Heavy Sweetness in case anyone is worried.

I've gotten request to translate more stuff (haha), but I'm afraid time is finite, my friends. I'm trying out something new with Once Promised (writing as I read the novel, instead of writing after I complete it) and it's been pretty interesting. So, Once Promised does not affect my translation pace, but unfortunately it has affected my writing and reviewing of other novels. Hopefully, I find a comfortable pace for everything soon. I have to admit I miss modern c-novels, so I plan to plunge into a few good ones after I finish reading the Once Promised/Lost You Forever series - so for those who are wondering if I will ever do modern c-novel translations, yeah, why not? But, I am going to avoid starting something new till Once Promised Book 1 is finished.

P.S. I have no idea where the image above came from, but in drawings, I like to think Jin Mi looks like this.

Master Pu Chi flicked a hair in front of his forehead, and sobbingly sighed, "I always knew I had unconventional looks, but never thought that besides women, I will also attract males! Alas, I only like gentle girls, and will have to disappoint Phoenix's love at first sight. Ah, this is to commit a sin. Xiao Er Immortal, don't you agree?"

I dazedly paused for a moment then answered awkwardly, "Truly, it is to commit a sin..."

"Night wishes the Heavenly Empress prosperity and longevity," a familiar voice coursed through the hall. I lifted my head and saw Night lift a goblet of wine in the direction of the Heavenly Empress. It turns out that the toasting has just begun, as Night was the first prince, it was logical to start from him.

The Heavenly Empress took a small sip of the wine goblet, her eyes widened and she said slowly, "Night is becoming more simple, the banquet which all the gods attend, but you only wear one stem of grapes as a hair clip. I can understand that Night is thrifty, but outsiders may not understand Night's personality like I do, and I'm afraid they will be mistaken that Night is not giving face to me. Then, they will create some rumours of discord between us two. What does Night think?"

Night finished the goblet of wine and gave a dashing smile, "The Heavenly Empress have misunderstood. A white jade dragon clip, a pure silver or golden flower clip, a jade green clip, all these might be precious, but these are just material goods. To Night, these cannot beat the value of one stem of grapes, this stem is bestowed by a close friend and have a special meaning. Today is Heavenly Empress' birthday banquet, Night thinks nothing else is more befitting of this occasion."

Haha, Night's words all speaks of truth, I like it.

Master Pu Chi grabbed my shoulder and said, "Is Night's good friend, Xiao Er Immortal? I see the stem on your head is identical to his."

Ah, this Master Pu Chi lacks discrimination in his sight. Just like how no two people in this world is alike, no two grape stems are exactly the same.

"The person who accompanied you that day in the tea house is Night? You and Night..." Master Pu Chi continuously shook his head, "I always said that since the Heavenly Emperor is so flirtatious, there needs to be a balancing force, and now true to my words, who would have thought both of his sons like males!"

I was modestly listening to Master Pu Chi's speech when I suddenly saw Phoenix looked at Night and his expression rapidly darkened, in his gaze was a glare as sharp as a sword. I looked at the Heavenly Empress, her expression was profound. Only the Heavenly Emperor laughed and said, "This stem is interesting, is your close friend here today at this banquet?"

Night's expression did not change as he said lightly, "Night's friend is not a god or immortal, only a sprite, so he would not be invited today."

"What a waste. This person must be a deep philosophical wise man, why don't you invite him to the next banquet?" the Heavenly Emperor said.

"Yes," Night bowed with his hand clasped and returned to his seat.

A deep philosophical wise man? I rubbed my chin, this Heavenly Emperor has good vision, just by one grape stem he can see my character and give such an accurate description.

Phoenix lightly raised his brows and turned to speak to Night. Master Pu Chi laughed and hit my shoulder, "Ah, Xiao Er Immortal is a sprite. So you are the same level as me!"

Phoenix seeing this, immediately stopped speaking, and his gaze stopped at my shoulder. Phoenix pressed his lips, with a flick of his finger, a small red glow like a firefly flew towards me at great speed, even before I could dodge, that red glow passed my shoulder, without leaving any trace.

Thank goodness Phoenix missed his aim, who knew what would happen if Phoenix's powerful magic had hit me. I slapped my chest, and before I could celebrate, I felt something cold pressing behind me.

I reached out to grab it, it had a wet slippery feeling, I pressed it, it had a soft feeling. Long, cold, soft... unless... my hairs stood up behind my neck as I slowly turned around.

A long bamboo snake had hooked around my back. I quickly jumped up. Buddha Grandfather please help me, this is the grape's mortal enemy, my whole body trembled.

"Ah?" Someone said in a deep voice with unhappiness, "What is the matter with this immortal friend?"

I turned back, and saw that all the gods in the hall were sitting comfortably and looking at the standing me with suspicion. The Heavenly Empress raised her eyebrow at me, she must have been the one who spoke earlier.

The Heavenly Empress must have as bad a temper as Phoenix, it is better to have one less trouble, so I said, "Nothing, haha, nothing is the matter."

I turned around and searched for Master Pu Chi to change seats with me, but the Heavenly Empress narrowed her gaze at me and said displeased, "May I ask where this immortal friend come from? You must still wear a false appearance when you attend my banquet? Can you show your true self?"

I touched my face, "Ah, I was in a rush to get out and forget to change back." Once Phoenix is angry he can conjure a snake, this Heavenly Empress' temper is as bad as Phoenix, it is better that I do not offend her. I generously waved my hand over my face.

I smoothly changed back to my original appearance and confusedly looked at Phoenix, what did he want to wait for?

The gods in the hall, some had raised their goblets in mid-air, some were discussing in each other's ears, now all of them stopped moving, as if they had been frozen by a spell.

"Si..." Someone sucked in a breath of cold air.

In a while, a crashing sound was heard, someone's wine goblet had fallen and broken into pieces.

Comments: My favourite part of this chapter! The BIG reveal.