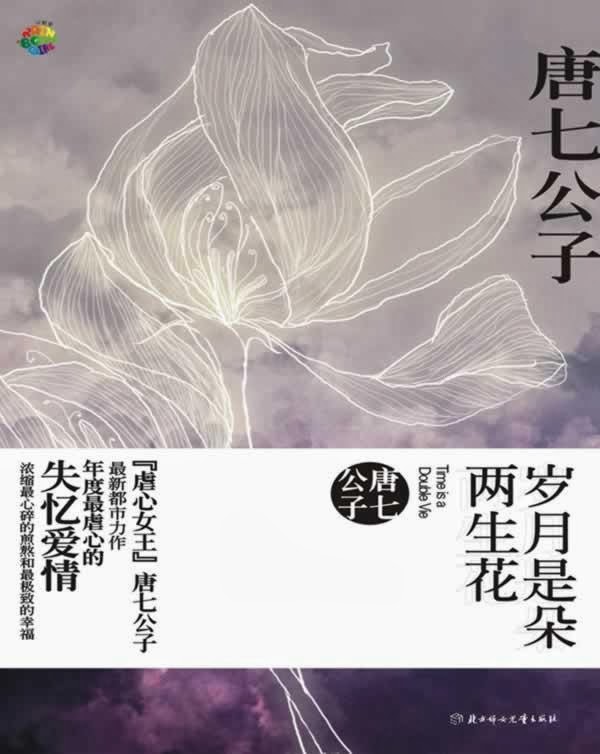 First, I want to wish Peanuts a happy 1 year blog anniversary (officially Feb 13 2014)! I can't imagine the c-novel english community without Peanuts' blogs and recommendations <3. Everyone go wish her a happy blog anniversary!

Peanuts told me that since I'm such an ardent fan of Tang Qi Gong Zi (since renamed to Tang Qi/Tang7), I should read her modern novel, Life is a Twice Blooming Flower. Though she did warn me about the weak plot structure, it was still slightly disappointing as a BIG Tang7 fan.

Yesterday, I finally joined weibo just so I could follow the updates of my favourite c-novel authors. Wow, it's a treasure chest! Tang7 actually answers lots of questions from fans and it's interesting to read her thoughts. I will try and do some weibo translations too one day!

Anyway, I found out that Tang7 has heavily edited Life is a Twice Blooming Flower, and most of all, she rewrote the ending! Yan Song and Qin Mo re-unite with a hug in public! <3

I don't have all the edits, but she posted the new ending on her weibo, and I'm translating it to celebrate Peanuts' blog anniversary! Enjoy! 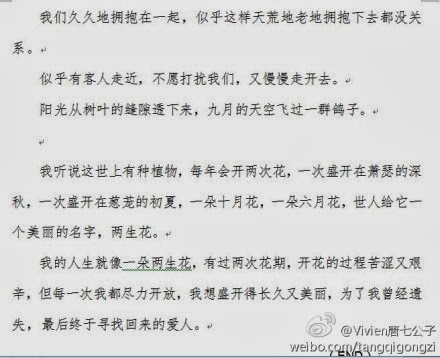 We embraced each other for a long long time; as if it was perfectly fine to just hug each other like this even if the sky becomes desolate and the ground grows old.

Guests appeared to walk close, but were unwilling to disturb us, and so slowly walked away.

Sunlight shone through the gaps between the tree leaves, a flock of pigeons flew through the September sky.

I once heard that there was a type of plant on earth, every year it would bloom twice,  once in the dreary cold deep in autumn, once in the abundant vibrance early in spring, a flower in October, a flower in June, it was called a beautiful name, the twice blooming flower.

My life was like a twice blooming flower, there were two flowering seasons, the process of blooming was bitter and difficult, but each time I gave it my all, I wanted to bloom enduringly and beautifully ---for the lover I once lost, but finally, at the end found back.