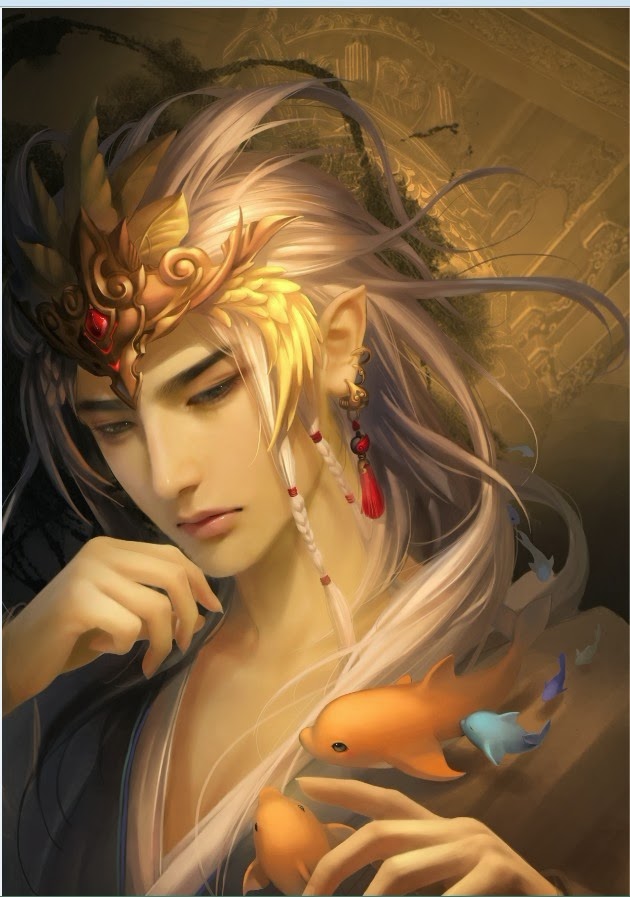 Chapter 1 pretty much blew me away and consolidated my notion that Chi You is quite the exciting male lead - full bloodied, cunning but heroic at the same time. After reading Chapter 1, you will look at the Chi You in Chapter 2 in a completely different light - realising the weight and gravity behind the choices and his actions... and the consequences that might follow after.

P.S. If you want to discuss spoilers (ie, what happens beyond the chapters I summarised so far), please put [spoilers] [end spoilers] tags in the comments because I'm trying to read this novel unspoiled as much as I can. Thanks for reading <3

Chapter 1: I was Originally A Wild Man

The chapter starts in Shen Nong country, as it is in the centre, it is one of the richest, with the most people and the greatest amount of exports. At the southwest of Sheng Nong, that's where it is the wildest, with ferocious beasts and poisonous atmospheres. This is where the Jiu Yi tribe lives - it is a very remote uncultivated tribe and they are treated as the lowest ranked citizens. The males are born to be slaves, the females are born to be maids.*

A hundred years before, the Jiu Yi tribe was unhappy with this cruel slavery and so started to band together and rebel. Because of one strong malicious beast that helped the Jiu Yi tribe, they were able to deal with tens of great soldiers from the God Tribe and this caused the Yan Emperor to be disturbed. The Yan Emperor called the best warrior in the Sheng Nong Tribe, Zhu Rong (the Fire God) to personally deal with this beast.

So, Chi You is not named by Tong Hua throughout this chapter, but it is clear that the strong malicious beast that helps the Jiu YI tribe is Chi You. Zhu Rong comes to Jiu Yi Tribe and formulates a cruel plan to get Chi You to come out of the forest - he will kill 10 villagers every hour until Chi You turns up. One of his subordinates mention that gods are not supposed to kill humans, but Zhu Rong says who will know if they don't tell?

Before Zhu Rong arrives, there is a lovely interlude, where the tribe witch tells Chi You not to come out and to escape as Zhu Rong is coming. The tribe witch thanks Chi You for helping them, but they rather be slaves than have the Beast King be killed. Apparently, they had already sent 100 males and 100 females to the Yan Emperor as a promise of obedience and he has decided to forgive them and the Beast King.

So, two hours pass and Chi You does not appear. Twenty people have been be-headed. At the third hour, Zhu Rong and his subordinates have relaxed and grown complacent, thinking Chi You is a coward. But it is at that time, Chi You cast a magic that caused one part of the ground to capsize into a hole - Zhu Rong hastily and angrily directs his flame at it. Zhu Rong mistakenly kills one of his subordinates instead and Chi You takes the chance to escape. The villagers point out to Zhu Rong that he cannot behead any more of them because Chi You did appear. Zhu Rong keeps his word, and even more infuriated, chases after Chi You with his soldiers.

Chi You manages to avoid capture for a long part of the chase in the forest with several beasts coming to his help, but ultimately, Zhu Rong is too strong. Zhu Rong catches hold of Chi You but Chi You cleverly tries to knock Zhu Rong's vulnerable part (the part under his erm stomach), which is the only part not covered in fire. So, Zhu Rong lets go of him, and Chi You manages to escape again.

However, after being on the run for 7 days without eating or sleeping, Chi You knows that he will ultimately be captured - his leg is injured and his hand is burned. He is the Beast King, he knows what happens when a beast is captured by the hunter. He does not want to be skinned and become a display piece in someone's pedestal. He was at the peak of a cliff - he thought he would rather fall down and die. Then, a sweet smell wafts into his nose - he starts to follow the smell towards a mountain stream. It is in the thick of spring where the peach blossoms are all flowering by the side of the mountain stream - a girl in a green robe is laughing. She strips and jumps into the mountains stream. Chi You feels something warm and uncontrollable course through his heart - like the blossoming of a first flower.

[I love the description of Chi You's awareness of young hard-bloodied love so I shall translate it!] Translation:

Now, he understood. At this rich, verdant and vibrant spring day, he was like the countless beasts in the forest mountain, once they saw a female beast, they suddenly understood.

This girl in the mountain spring, caused the piece that was sleeping deep in his soul to awake.

He wanted to carry her to the nest on the top of his tree, bring her to his cave in the mountain, like the bird that was singing - tell her how safe and secure the nest he had build, it could protect against eagles, it could protect the eggs she will birth; he wanted to catch fresh rabbits for her and present it to her, bite off the juiciest breast for her, and like the red fox beg her to eat; he wanted to surround the mountain stream with his pee, so that every tree, every rock, would have his scent, would tell all the beast and hunters that this was his land. To let her freely play and catch food here, to not allow anyone to harm her, if anyone dared to cross into his land, to threaten her, he will be like the white tiger and fight him to death.

These wild overpowering thoughts flashed through the dark sky like lightning, his ignorant heart burst into light.

Spring, so this was Spring!

The beast sadly looked at her for a while, then determined turned his back, and jumped down the precipice, dragging his broken leg, he limped towards the direction away from the mountain stream. He did not hide any signs of his route as he journeyed, in fact he would stop every now and then to listen, to confirm that Zhu Rong and soldiers had gone far away from the mountain stream, and was chasing him.

In this spring, where the flowers are blossoming and the butterflies are dancing, hundreds of years of loneliness and confusion have disappeared. But, at the moment he understood what to do in the beautiful spring, he could not live to the next spring day. The only thing he could do was  to not let her get hurt.

Comment: At first, Chi You reminds me a bit of the Monkey King, after all Tong Hua even writes about little monkeys playing around his home. His rebellious and direct nature and how he opposes authority - especially unjust authority - appears to be similar. It's also noted in this chapter that Chi You is very young, hence he is no match to the very senior Zhu Rong.

*I extremely disliked that the Jiu Yi Tribe are forced to slavery - what kind of logic is that? It's pretty horrific and I can't help thinking Chi You was a fair protector. My heart ached when twenty people was beheaded, but I also like that Chi You didn't rush out immediately because he knew how disadvantaged the situation was - better he came later and succeed, then not at all.

I will explain what happened from after Chapter 1 to when A'Heng and Chi You meet again in my summary for Chapter 3.

Also, Chi You's inner monologue and confession regarding A'Heng slayed me. It killed me all the way to my heart and caused butterflies to dance as well. Tong Hua doesn't say it (yet?) if the girl in the green robe is A'Heng but my heart tells me they are one and the same.
Posted by Decembi at 12:50