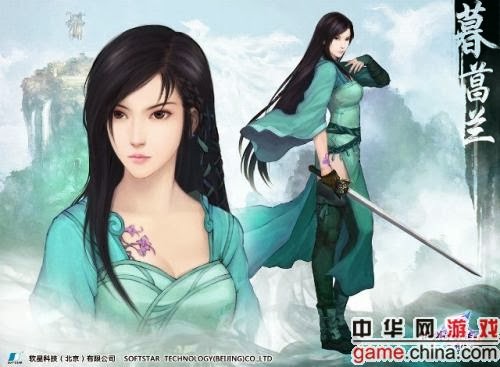 [Edited on 25/2/14: I've realised that the version I was first following did not have the full chapters, so I'm editing this to fit the correct version. This actually happened in Chapter 2 and not Chapter 1. I will be going back to summarise the prologue and Chapter 1.]

Oh my! I only planned to do a "my thoughts" kind of entry for the chapters as I read the novel but I loved the first chapter so much that I ended summarising it in great detail and translating the end of the first chapter which I loved. Ok, shall not spoil it, so my comments are below.

P.S. Oh, for avid fans of Heavy Sweetness, do not fear for I have diligently translated until Chapter 9.4. I will be posting the next translation part up this week :).

Chapter 2: Mistakenly Falling into the Web

Chi You was rushing back to Sheng Nong when a girl dressed in green asked how to go to Bo Fu country. That's how they first met, under the red glow of the sky, Chi You says he is from Bo Fu and the girl introduces herself as a normal peasant, Xi Ling Heng, she can be called A'Heng.

They travel to Bo Fu, which is a country where water is very expensive. No one knows why but the Bo Fu Mountain started burning, hence water became scarce. At a shop, an old man comes in begging for water, and after Chi You and A'Heng struggles over the kettle for a while (Chi You telling A'Heng she can't afford it), A'Heng gives water to the old man. The old man tells them that Bo Fu Mountain is burning because the Fire God, Zhu Rong, is cultivating his powers and fire there. This caused fights in the neighbouring villages as they are all fighting for the scarce water supply. At this, A'Heng secretly thinks to herself that this would be difficult to handle because the Fire God is one of the ten strongest gods.

While Chi You is resting, A'Heng goes up to the Bo Fu Mountain by herself. So, she climbs up and was about to step on something when she hears a cry and realises Chi You has fallen behind her. So, she runs back to help him and at that moment, the place A'Heng almost stepped on becomes a deep hole with a huge spout of steam shooting through [Chi You secretly saving her haha].

While A'Heng helps Chi You down the mountain, Chi You tells A'Heng he is not engaged yet and he has to tell his mother if she wants to marry him because she is hugging him so tightly as she helps him down (haha). It's very cute because Chi You refuses to go back down and acts a bit like a village idiot - he insist that A'Heng is going treasure hunting on Bo Fu Mountain and wants to follow her up. He also delays her journey and often causes her to take the longer way during the route, but it's implied that he has saved her from poison or dangerous potholes because of it.

So finally, Chi You doesn't want to go further, but A'Heng does not want to give up. So, A'Heng gives Chi You the special ice silkworm robe that her mother gave her to protect Chi You from the small blazes. Chi You can feel the coolness from the robe A'Heng placed on him and he asks what is it. A'Heng just tells him to wear it carefully, but instead of going down, Chi You gives a cunning smile and pretends to have twisted his ankle. Haha, so poor A'Heng has to carry Chi You --- and he becomes heavier with each step until A'Heng thinks she is carrying a small mountain.

At one point, A'Heng takes out a box which looks like it's made of white jade, but it's actually made up of a ten thousand year old ice, and in it there are two ice silkworm kings. She tells Chi You to stand behind her and uses the two ice silkworm kings to cast an icy net over the fiery mountain so that the fire can be extinguished. It appears to work at first, then the fire fights back even stronger and A'Heng almost falls down the cliff but Chi You grabs her. A'Heng then pukes out blood and loses consciousness.

The citizens of Bo Fu Mountain are shocked - there was a clash of white and red light, then silence. There was an ordinary night sky filled with stars- something the citizens have not seen in tens of years. As if the whole of Bo Fu had fallen under a spell. More extraordinarily, water started spouting out of the dry ground of Bo Fu and the citizens all dance in joy.

A'Heng wakes up and she is surprised that the fire has been extinguished. She is suspicious and asks Chi You if he extinguished it as she saw a huge blaze of fire heading towards her. Chi You nods his head saying he threw the box and the fire extinguished - this causes her to lose her suspicion since Chi You is acting like a village idiot wanting credit (haha) and he doesn't even recognise her ice silkworm kings.

A'Heng asks Chi You if he has forgotten who owns this fire mountain. If the fire god Zhu Rong knows Chi You extinguished his fire, he will extinguish Chi You. Chi You starts to feign fear and starts to deny that he did anything, as he had fallen down after the box flew up and didn't know what happen. As they head down the mountain, A'Heng cries to the crowd, "The Fire Extinguishing Hero is here!"

Everyone surrounded them and knelt in front of them.

Xi Ling Heng forcefully pushed Chi You in the midst of the crowd, and walked in front of the crowd and declared determinedly, "I extinguished the fire." She winked at Chi You, I was only teasing you, you coward!

All the people started to splash water at Xi Ling Heng, as she tried to dodge, she also laughed, "All of you must remember, I am Xi Ling Heng, if anyone asks who extinguished the fire, you must say Xi Ling Heng."

Deep in the crowd, Chi You silently watched Xi Ling Heng who was dodging the water and laughing, his gaze was exceptionally dark and deep, the lazy smile on his lips revealed a barely discernible warmth.

Comments: Eeks! I loved this chapter. It's quite conventional actually - kind of like a romantic comedy kind of meeting, which I loved. Both of them pretending to be village idiots, but Chi You being much more cunning since A'Heng starts protecting him left, right and centre except Chi You was actually the one protecting A'Heng but she doesn't know and just thinks he is being a village idiot. Ahahah, I love it.

I also love how Chi You is this cold calculating Beast King, but his facade starts to melt at this silly young girl who isn't very powerful but tries to help people regardless of the obstacles she will face. The chinese idiom that perfectly captures it is 不自量力 (not knowing one's strength), but still going ahead anyway.
Why is this a sad ending??!!! I am a bit like A'Heng, naively going up the fire mountain, to extinguish the Fire God's flame, not knowing what will burn her back later...
Posted by Decembi at 23:14