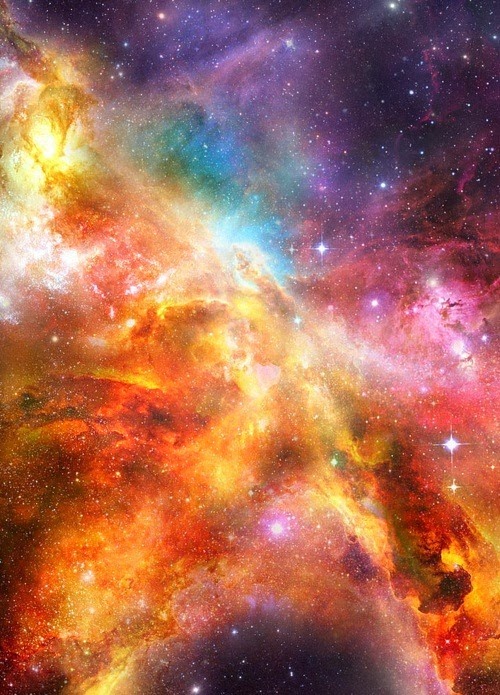 Actually now that I'm reading the correct version, this fits the mythological vision of Tong Hua much better than if the first chapter started with the fated meeting of Chi You and A'Heng. If we started with Chi You and A'Heng, they become the centre of our universe, magnified, our main focus points. But, now that the landscape has been pulled way back, until we are looking at it on the level of the creation of the universe, we see that every figure is but a star in a wider galaxy. Even the mightiest creator will one day fade, what more the descendants of the descendants of the once great? Maybe, all we can ask in life is to meet people who will imprint onto our soul, love into our bones and give us a promise we try to fulfill in all our finiteness.

The universe was in chaos, when it just started to form, there was only one Emperor King, which was the person who created this world, the great Emperor Pan Gu*.

The Great Emperor Pan Gu had three subordinates who were as close to him as siblings, the one with the greatest power was a girl, it has been too long ago, so her name cannot be remembered, it is only known that later she built the Hua Xu Country, and the people bestowed on her the title, Ruler of Hua Xu. The other two were males, one was the Ruler of Shen Nong, he garrisoned himself in the Central Plains, defending the peace from all four directions, the other one was the Ruler of Gao Xing, he positioned himself in the east, he protected the point from which the sun rose and where all the water flows to.

After the Great Emperor Pan Gu passed away, wars were ablaze on the lands, the Ruler of Hua Xu hated the never-ending wars and recused herself from the war, creating a beautiful and peaceful Hua Xu Country. However, she is still remembered by later generations not because of Hua Xu Country, but because of her son, Fu Xi, and her daughter Nu Wa.

Fu Xi and Nu Wa were powerful and virtuous leaders, they gained the respect of all the heroes of the land, and finally stopped the war, and were crowned the Great Fu Xi King and the Great Nu Wa King.

The deeply battered Great Wilderness finally reached a reign of peace and regained a sense of life and vitality.

Many thousands of years later, the Great Fu Xi King passed on, the Great Nu Wa King was in great pain from her sorrow and left to live in the Hua Xu Country. No one ever saw her again, whether she is dead or life became a mystery, and the tribe of Fu Xi and Nu Wa disappeared.

With the disappearance of the Fu Xi tribe, the Central Sheng Nong and the Southeast Gao Xing became the two great conquerors, on the surface they maintained the blood oath signed in front of the Great Fu Xi King and the Great Nu Wa King and did not transgress each other, but secretly their ambitions were burning and they wanted to swallow each other.

In the Northwest Wilderness, there was an ordinary mountain called Xuan Yuan Mountain, at the foot of the mountain lived an unnoticeable small god tribe, Xuan Yuan tribe. At a grand ceremonial rite, the Great Elder of the Xuan Yuan tribe overcame the group's disagreement and appointed the youngest hero of the tribe to become its leader. But even that Great Elder did not expect what the young hero ultimately accomplished.

In just a span of a few thousand years, this young hero led the unnoticeable Xuan Yuan Tribe to a rapid ascent in power, when Sheng Nong and Gao Xing finally realised his danger, they had already missed the opportune chance to eliminate him. They could only sit by and watch the Xuan Yuan Tribe rise to become the third Great God Tribe, a strength that equalled the Sheng Nong and Gao Xing's two ancient god tribes.

Thus, the Central Sheng Nong, the Southeast Gao Xing, the Northwest Xuan Yuan, they each ruled a third of the land, three independent Imperial Empires.

*In Chinese Mythology, Pan Gu was the creator of the universe.
Posted by Decembi at 13:55