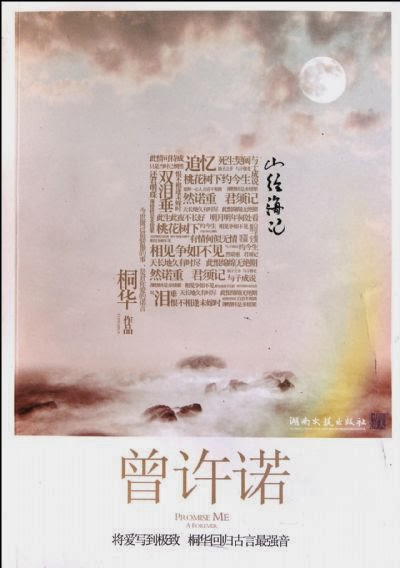 I'm an avid follower of ockoala's translations at Koala's Playground for Lost You Forever. To prevent myself from reading forward past ockoala's translations, I've decided to read the prequel, Once Promised. Actually, I never thought I would read this novel since it has a sad ending and I don't touch tragedies at all, but since the sequel promises to have some sort of happy ending, I like to think that I can see Once Promised and Lost You Forever as two parts of a whole, yin and yang, and whatever regrets in the first novel is hopefully answered in the sequel.

Contrary to my usual practice of reading c-novels in one go, I've decided to read Once Promised in parts (if I can withstand the suspense hah), in the hope that any bitterness or tragedy is more edible in bite-sized morsels.

The world-building of Once Promised is pretty complicated, so I'm going to break it down for my reference and hopefully help any other readers interested in the the background of Lost You Forever or in reading Once Promised.

Here's a translation of the synopsis:

Under the Peach Blossom Tree, Chen You made her a promise of love, he will give up everything, and stay by her side for the rest of their lives*.

*The best promise of all - I can sense the tears already :(.

Besides, knowing that it's a sad ending, I've actually avoided any spoilers since I wasn't interested in reading Once Promised, so I'm going in with pretty much a clean slate. I went to read up a bit about 山海经 (Book of Mountain and Sea), which Tong Hua based both novels on. It's pretty fascinating as apparently many tales of Chinese Mythology came from this book, eg, NuWa patching the sky and Hou Yi shooting the Nine Suns- but it also talks about chinese medicine, mythological creatures, etc. When I was young, I was deeply into all kinds of mythology - Greek, Norse and Egyptian, so I feel quite sheepish to lack so much knowledge about Chinese Mythology... I guess all these stories were so naturally part of my background, that I never thought about them on a more conscious level.

The fascinating thing is that Chen You is a real character from the Book of Mountain and Sea, and famously rivals/battles the Yellow Emperor. Tong Hua is probably writing on more levels than I could ever understand. And with that, I shall jump in!

Will update on my thoughts again as I read.
Posted by Decembi at 01:00