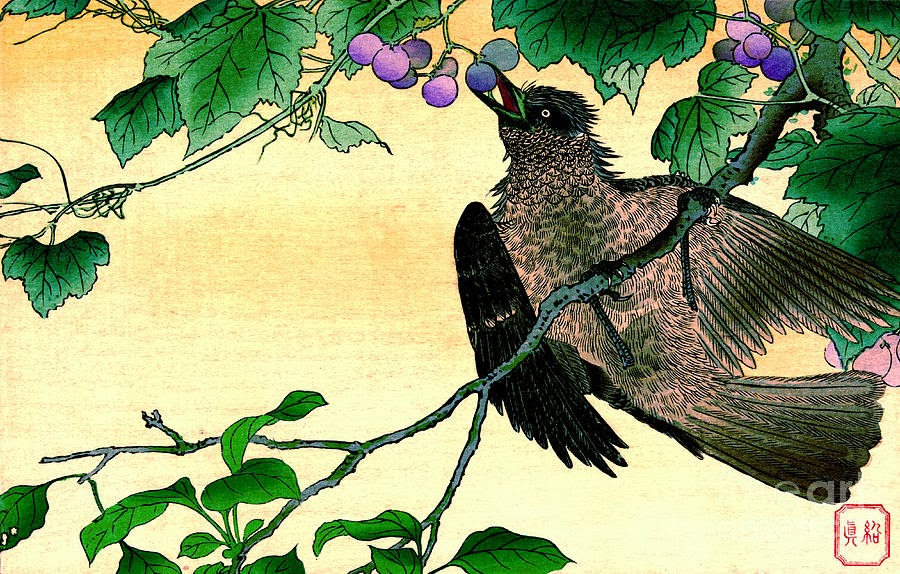 The above is such a great picture of what Jin Mi had in mind when the "crow" Phoenix wanted to eat the grape. Haha.

Night saw my action, so he very cooperatively did not pick up the chess pieces. He placed his hands in his sleeves and looked at me with a face full of interest.


There was a "Pi Li Pa La" sound, and it worked! I fixed my gaze as I saw the chess pieces undergo a transformation, and became an ice hail the size of a fist, it rolled across the stone table, and landed on the floor. After being shone by the sun, it melted into soiled water.

The person opposite me sucked in a breath of cold air. I raised my head, and saw the little soil god's eyes were staring extremely wide, and paused and looked at me blankly.

"He is completely stunned by my sorcery!" I half covered my mouth as I moved towards Night's body and whispered to him.

Night let out a breath of air, stepped forward half a step, and covered Jin Mi with his body, "Little soil god, are you here for something?"

The little soil god regained awareness and coughed, "Small god greets his Night Highness. Today, small god must go to Lao Jun's manor to take on my assignation. Before I leave, I wanted to bid my farewell to your highness, Phoenix Highness and Ling Guang Gentleman (this is Jin Mi's male alter ego in the mortal world), " Little soil god raised his neck and tried to look pass Night's body but he was blocked by a swish of Night's sleeve.

"Heh heh," Little soil god touched his head and continued, "Unfortunately, it seems Phoenix Highness and Ling Guang Gentleman is not here. How shall I greet the immortal lady?"

I just realised that I had forgotten to transform back after regaining my true form last night, no wonder little soil god did not recognise me. I was about to answer him, when Night said, "Today is Heavenly Empress' birthday, all the gods are going to pay their greetings. If little soil god rushes down now, perhaps you can still catch the beginnings of her ceremony."

The little soil god was so excited that his whole face became red and bowed three times to Night, "Thanks for your Highness' guidance. His highness is indeed as they say - a truly almighty kind god."

Night waved his hand, "No need to thank me," and continued in a soft voice, "Regarding this lady... perhaps the glare of the sun is too bright today and caused the little soil god to see wrongly?"

I hit the back of my head and cried, "Since it is the Heavenly Empress' birthday, why is Night still in the mortal world? Why don't you go with the little soil god? At least you will have company."

"No hurry, the birthday feast will only start at nightfall. Furthermore, all the gods from north south east west will come and give their greetings, it is no big deal to not have me," Night said looking at the melted ice hail with a thoughtful gaze.

"Ah?" Is that such a reasoning?

Night waved his hand to remove the soiled water on the floor and said, "I was not born from the Heavenly Empress."

"Oh. So, which heavenly concubine is Night's birth mother?" I heard this for the first time and was naturally curious.

Night's gaze slowly became cloudy, "My birth mother was not a concubine, but a sprite in the Ling Po river that could not be more ordinary." Abruptly, he gave a miserable smile, "As ordinary as the mortals who live in the mortal world, difficult to escape one's death."

Ah, Night's word appeared to have a deep zen philosophy, I could not understand. I only knew that Night's birth mother probably passed away.

"So where are Jin Mi's parents?" Night changed the topic.

"Parents?" I was dazed for a moment, I never thought of this before. I rolled my eyes and said, "I don't know, but thinking of it, they are probably very very old grape plants."

Comments: Haha, Jin Mi can always make me laugh. Sometimes, I think it's her unaffected nature that is attractive - anyone else would have pitied Night, but Jin Mi does not understand and cannot understand. She can only be herself and make him laugh.