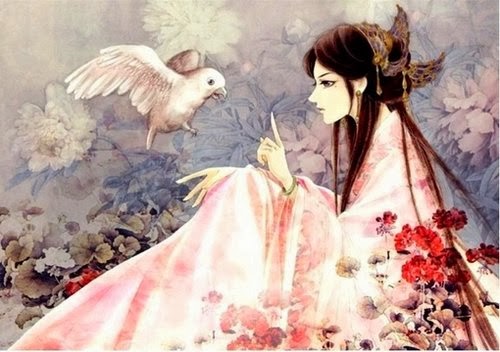 As I read Once Promised and translate Heavy Sweetness, I do think that all the other characters except Jin Mi, could quite easily survive and fit into the palace politics of Tong Xia's immortal fantasy, and so what makes them so different is Jin Mi. Jin Mi's candour, shamelessness and fearlessness is what makes it all so laugh it out loud funny.

Just a small comment on the comparisons between Three Lives Three Worlds, Ten Thousand Miles of Peach Blossom and Heavy Sweetness --- I was always slightly confused why c-novel readers like to make these two novels compete with each other. Since I love both, I think both are great in their own right. I do think that Bai Qian and Jin Mi are extremely different, and their lack of sharpness regarding their emotional feelings is a very small similarity. Their stark difference is especially clear in this chapter - Bai Qian being a Higher Immortal, always tries to preserve her stature, pride and class in all formal events regardless of what she might be cursing inside, but with Jin Mi what she curses on the inside and outside is almost the same (even if she subjectively believes otherwise haha). Jin Mi is a small sprite whose one aim is to become a god --- not because she wants to be a god, but because she wants to be powerful enough to leave the Flower World on her own and experience the world. So, when she comes to the Birthday Banquet, it's not because she is trying to create mischief (though she's a natural mischief generator), but because she never knows when she will be captured back to the Flower World and she wants to see and experience all the exciting parts of life!

Who knew that this "Heavenly Empress" would elegantly walk to the palace front and stylishly bow towards Night and Phoenix. She said, "Sui He of the Bird Tribe greets the two Highnesses." It turns out that she wasn't the Heavenly Empress, but the peacock that was the head of the bird tribe - the one that Flower Leader had cut off the food supply for ten over years. But it looks like the supply has been restored, as her cheeks were supple and red, and the bird immortals behind her were energetic and healthy.

"Besides the immortals from the Flower World, it looks like all the female goddesses and immortals are here at the Heavenly Empress' Birthday Banquet today," Master Pu Chi muttered, "Unless they are taking this opportunity to settle Phoenix's marriage as well?"

Ah? So, it's to choose a wife for Phoenix.

An immortal nearby stroke his white beard and said philosophically, "This immortal friend speaks soundly, I am of the same opinion."

In a short while, the surrounding immortals all turned their heads in assent, the excitement grew, one spoke one agreed, the discussion became very heated. Indeed, regardless of being on heaven or earth, gossip will never die.

I could not help being infected, and excitedly joined the discussion, listening to Master Pu Chi comparing all the female goddesses and immortals present today. I saw Phoenix was speaking to the peacock goddess next to him in a low voice, and had a sudden inspiration.

"I bet two grapes that the peacock goddess will win."

"I bet a jade cup that Lady Yao will win."

"I bet an immortal pill that Elite Guard Immortal* will win."

"I bet a sword tassel that Ji Guang Goddess will win."

In a while, the group of immortals discussed heatedly as if there were seven mouths and eight tongues, many items were put out for the gamble. Haha, all these items will be mine in the end. I gazed at his Second Highness with satisfaction. Phoenix matching Peacock, two flamboyant birds, no matter how you look at it, they are compatible!

Ah? To think that Phoenix is the type of bird who plays with someone and then dumps them.

"Ah, speaking of this, I have heard of it before. But, it seems that the book boy actually fell for Ji Du Xing Master, and his Second Highness was dejected for a while, and that is why the book boy was cast out of his palace," The philosophical old immortal said butting in.

"Wrong, wrong, it seems that the book boy overestimated himself, and fell for the same immortal as his Second Highness..." said another immortal who could not help joining the conversation while shaking his fan.

At this moment, the loud-speaking small immortal attendant outside the palace whisked his horse tail and exclaimed, "His Heavenly Emperor arrived! Her Heavenly Empress arrived!"

Before the voice finished, the hall full of immortals all stopped talking, gathered themselves, and uniformly stood up. They respectfully gathered their hands in front and bowed their heads to welcome the two great gods. I was going to stick out my head to see what was happening but seeing all the immortals in this position, I thus did not shamelessly look around but bowed my head halfway, so that my eyes could still see slightly further.

Just with one gaze, my eyes was almost bedazzled by the light, I had not even seen the Heavenly Emperor and Heavenly Empress, but saw a flash of blinding light. I squinted and realised that two rows of female immortals were walking in front in formation, each holding a glass box that held a star that had just formed. Although the star had just gained its shape, the glow was not weak, shining through the glass such that anyone who looked at the glow would become dizzy. No wonder no immortal dared to look up! My eyes ached and I could not tolerate it in the end and lowered my head.

"May the immortal friends dispense with ceremony and all sit down!"

Amitabha, after the time it takes to make three pots of tea, I finally heard an impressive voice travel from the big palace for us to sit down.

The Flower World never had so many rules. Thus, after bowing my head for so long the blood vessels were a bit stiff, when I just sat down, I felt my legs weaken and my body went crooked, and fell into the arms of Master Pu Chi whose arms moved faster than his eyes. After I sat down properly and raised my head, I did not see the Heavenly Emperor or Heavenly Empress, but my gaze hit straight into Phoenix's pair of long and slender phoenix eyes.

How should I describe his gaze? I had once heard that in the mortal world there is a martial arts technique called "Raging Blaze Fist", but I have never heard of "Raging Blaze Eyes", and I also heard that the mortal world has a martial art technique called "Blizzard Fist", but have never heard of "Blizzard Eyes". But now, I privately thought that Phoenix's long slender eyes and expression, was really half a raging blaze, half a blizzard, taking turns with each, extremely worth observing.

This bird was truly stingy, I only took an extra 300 hundred years of cultivation!

I disdainfully turned my head, and changed my focus to the two great gods. The god on the right side of Phoenix was wearing a golden phoenix-embroidered silk robe, with a phoenix crown, the phoenix crown had golden pearls hanging from its side, truly showcasing her elegant and rich aura. A pair of long and slender phoenix eyes lightly lit up. Ah, looking at this coquettish expression, Phoenix truly inherited this.

"Today is my birthday banquet, how rare for all the gods to grace this occasion with your presence, causing the Purple Cloud Palace to be so full of vigour and life. I am very pleased," Even though that was what she said, the proud aura of the great god revealed a complacent expression as if all these was natural.

The gods below chorused, "It's nothing, nothing. It's a must, must. Your Heavenly Empress is too polite."

"May the banquet begin," the other great god announced. I examined him once over, a purple golden crown, white silk belt, a grand cloud patterned robe, his expression was less severe than the Heavenly Empress, his brilliant gaze unconsciously curved upwards, there were laugh lines around his mouth, he appeared to have the aura of a charmer, very different from the statue of the Heavenly Emperor that was placed in the small temples in the mortal world.

"To speak of the ability of the male gods, who is more flirtatious than the Heavenly Emperor himself? He has peach blossoms*** everywhere. It was rumoured that the cold reticient Flower Goddess was charmed by him for ten thousands of years," Master Pu Chi patted my shoulder, and gazed at the Heavenly Emperor with an expression full of admiration, "If we male immortals can achieve the level of the Heavenly Emperor, then we would have reached the peak. Xiao Er Immortal should take this chance to observe, if you need to grab a female immortal's heart next time, at least you would have a model in mind."

He hurriedly continued, "But, the present Phoenix I believe has an even greater potential than his father. But, why does Phoenix keep staring at me? Unless, what the other immortals say is true, his Second Highness actually like male immortals!"

*The Elite Guard Immortal is the strong female goddess with the sword in the previous chapter.
** This book boy is actually Jin Mi. Look at the summary for Prologue to Chapter 3.
*** As earlier explained for Ten Thousand Miles of Peach Blossom, Peach Blossom is used to connote love luck/fate in chinese mythology.

Comments: Ahahah, should we feel sad for Phoenix that Jin Mi is bartering him away? And, how she has turned the Birthday Banquet into a gambling den?