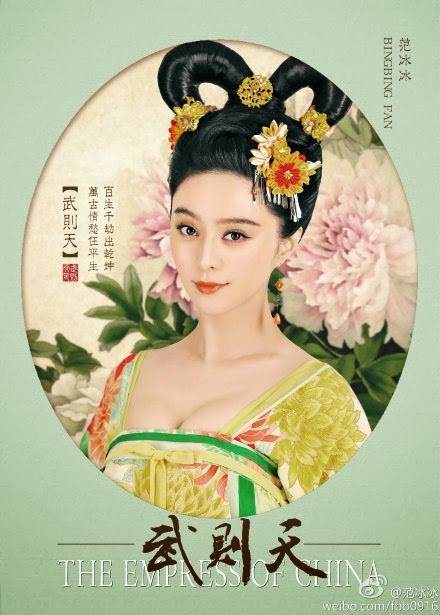 I've been wanting to write so much more - as there has been so much exciting c-novel news, but I've suffered quite a bad bout of fever and flu! Ugh, Hong Kong winter that blows hot and cold, sometimes in the same day! Hopefully, I will be able to complete all that I wanted to write before I head back home. My 2 months attachment to Hong Kong is almost done, and I can say I will have lots of fond memories of Hong Kong (ah, the food, the people, the chaos) and dim sum (you definitely touched my heart).

The photograph above is of Fan Bing Bing in some Wu Ze Tian movie, and gosh does she look great. When I saw it, I immediately thought that's exactly how I imagined the Heavenly Empress to look like. In my opinion,  Fang Bing Bing always looks over the top and ostentatious, but pretty darn awesomely so. With her flamboyant eyes and peony red lips, she has a beauty that is almost violent.

Holding a chicken feather as a token of authority. What sounded false when heard but is real when seen, it turns out that this phrase is not just a classical allusion. Also, it turned out that Phoenix was a bird stuffed with authority tokens, which is both tragic and admirable.

I am not a Phoenix, hence I have no habit of stuffing myself with authority tokens and running around. I didn't know before, but now that I knew, I naturally could no longer use the Phoenix feather as my hair clip. So, after entering the southern sky gate, I changed to a grape stem to clip my hair, and kept the phoenix feather in my robes.

The Heavenly Empress' Banquet was indeed not ordinary. There were gods from all around, bustling and boisterously riding on a cloud and heading towards the Purple Cloud Palace. The cloud I was riding on was not large and had almost completely dispersed outside the palace gate, but fortunately Master Pu Chi had astutely and quickly gave me a hand and hence I had landed safely.

Master Pu Chi's eyes gave out a flash of surprise, he said in an aggrieved and dejected tone, "Xiao Er Immortal has dismantled the bridge after crossing it so quickly, I have no preparation in my heart at all!"

"Ah, then Master Pu Chi can prepare now. Just that how long will Master Pu Chi take to prepare?" We fruits are usually generous, easygoing and kind to others.

Master Pu Chi seriously reflected for a moment and said, "I'm very weak, I'm afraid that unless there is an hour or two, I will not be able to accept this quick turnaround."

I raised my eyebrow, and Master Pu Chi laughed widely and continued, "I know astronomy and geography, I can not only lead the way, I can also talk and accompany Xiao Er Immortal, and pass the boring moments in this banquet."

I looked around and saw that of the gods that were talking to each other, there was none I recognised. Fine, I guess I will leave this water sprite as a companion.

At this moment, barely discernible wisps of clouds floated in from outside of the door, one extremely beautiful female goddess gracefully made her willowy slender entrance. "This is Lady Yao, the goddess of Wu Mountain, graceful and curvaceous, she is the most charming of the young goddesses. But, although curvaceous, her waist is twenty four inches, so she lacks some slenderness in the waist." Master Pu Chi, who is well-versed in astronomy and geography, said next to me.

Not a moment too soon, another weak and gentle-looking female goddess arrived. "Ah, this is a female elite from Xiang Shui, although her hands are a bit too big, but her gentle weak demeanour leads many to want to treasure her. Men especially likes this type, don't you agree?" Master Pu Chi hit my shoulder and sought to gain my assent. I looked at this female elite in the middle of two other female immortals as they walked daintily as if on the verge of collapse, and nodded my head in approval. Master Pu Chi then sighed, "But it's also not good to be as weak like tofu that is about to break, there still needs to be some vigour."

At the mention of vigour, the presence of a sword was felt, and in stepped a strong female goddess with a sword. Her slender eyebrows were raised upwards and her gaze was sharp. "Ah, this is Tian Hai's elite guard. Truly a warrior among women!" Master Pu Chi continued to gossip, "But often using her military might, it's afraid that not many male gods in the heavenly realms will be able to take her."

After criticising another eight to ten goddess' looks and personalities later, I had to admit that Master Pu Chi was someone who loved to gossip and stopped him, "Master Pu Chi appears to know quite comprehensively."

"Indeed!" Master Pu Chi grandly shook his robe and gave a look of utter pride, "To think that the book, <The Grand Appreciation Tome of the Beauties in the Six Realms>, which was once wildly popular in the six realms was wholly written by me! But now, there is only one existing copy. It's a pity that the beauties in the present age have deteriorated and are nowhere near the beauties of the past. Just reminiscing the Flower Goddess Zi Fen, now that was a real beauty, but a pity that beauties always have brief lives." Master Pu Chi shook his head and wrung his elbow in despair.

Ah, old ancestor Flower Goddess, I thought of her small tombstone, indeed her life was brief.

Suddenly, I felt that above my head was covered by dark clouds. It turns out that Phoenix had grandly sat on one of the palace thrones and had raised his eyebrow and shot a glare at me. Ah, this sharp glance is a bit too good. But, somehow it does not appear to be friendly, perhaps after waking up from the alcohol he has remembered that I cheated him of three hundred years of cultivation.

Thus, like an ostrich burying its head in the sand, I turned my head in another direction and pretended I did not see him, leaving his gaze which was like a sharp sword to slice at will at my head.

It was fine to turn my head, but when I saw Night, his starry gaze appeared to float towards my corner and his face had an expression of mild shock, as if seeing me was unexpected, yet also within his expectation. I gave him a smile, but unexpectedly he did not smile, but fell into deep thought. Did he blame me for breaking his boundary and running to the Heavenly Realms myself?

"The Water God has arrived! The Wind Goddess has arrived!" The small god attendant cried a little too loudly I thought, my heart was feeling a little guilty, and after his shout, my heart almost jumped out.

An elegant male god and a dignified looking female goddess grandly made their entrance with one in front and one in the back. They politely tried to invite the other to sit first, and after a while, the Wind Goddess reluctantly sat down first. This was a heavenly couple that treated each other with respect akin to guests.

"An unhappy couple!" Master Pu Chi nagged in my ear.

The Water God was as I had last seen him, his immortal demeanour was peaceful and indifferent, as if he could comprehend everything but see everything as nothing. He was of an extremely high level and I was extremely envious.

Night bowed his head towards the two and the two returned a polite gesture.

After this back and forth, a magnificent entourage made a loud and extravagant entrance. At the head was a goddess that was extremely captivating, she wore a fur cap that was very eye-catching. She was accompanied left and right by beautiful female immortals and this elevated her status even more. It was rare that even Master Pu Chi did not give any criticisms, I pondered - could this be today's birthday star, the Heavenly Empress?


Comments: This chapter was harder to translate than the rest because of all the adjectives and how I tried to avoid repeating them. Translating this, I began to appreciate even more the tiny details Dian Xian gives in her descriptions to reveal the personalities and relationships of the people... I just started to notice it consciously but I like how Dian Xian very often describes Night as having a gaze like the stars. It's such a lovely image, isn't it?

Also, her description of the marriage between the Water God and Wind Goddess. Pretty kick-ass, if I must say so. Haha. Plus, Master Pu Chi! Ah Master Pu Chi. I probably like him even more in the translations.
Posted by Decembi at 15:46