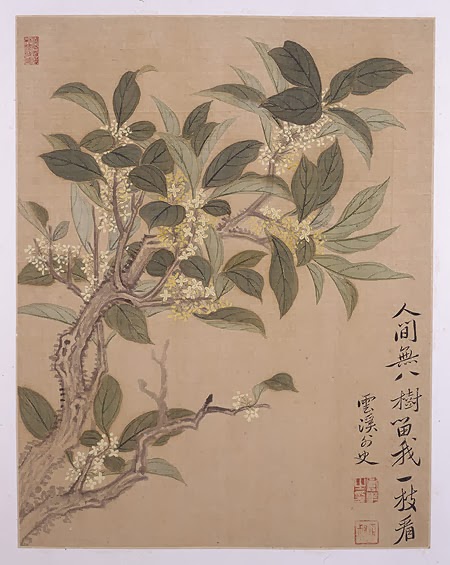 This is a faster update than usual and I want to give thanks for the support that have been given to the translations. I started this blog on 2 Dec 2013 after reading Heavy Sweetness Ash-Like Frost and 3L3W: Ten Thousand Miles of Peach Blossoms and being all be-dazzled by the new shiny world of c-novels. It's been slightly more than 2 months and it's pretty amazing for me that there have been 10,000 page views, because I never really expected for people to read my small blog. It's really great to be able to share with people my views and joy over c-novels, since I don't know anyone in real life I can talk to about them.

P.S. I'm saving some of the prettier images for the more dramatic chapters, and so have been posting paintings of flowers. Some are really lovely and I quite like this one - this is the osmanthus flowers that Jin Mi used to make wine.

Since the spell did not produce buns, I was a woman of my word, and treated Night to a small shop for breakfast.

Both of us changed our appearance, hid our immortal aura, and found a decent looking shop in the city. We picked a clean bench to sit on when we heard a voice from a neighbouring table, "Xiao Er (a nickname for shop assistants - literally "Little Two"), bring two or four buns."

"Coming!" The shop assistant flicked a white towel on his back, and smoothly brought forward a plate of steaming buns.

I watched and learned immediately. However, as the "Xiao Er" was already called over to the neighbouring side, following this order, I loudly hit the table and shouted, "Xiao San (literally "Little Three" and a nickname for mistresses/third parties), menu please!"

Suddenly, the whole shop fell silent. A deadly glare shot over from behind the bamboo shade on the right. I turned my head, and saw that two and three girls behind the shade, were glaring at me with hostility.

At a corner of the shop, someone broke out into laughter.

I turned and leaned close towards Night, and asked in a low voice, "Is it because I bypassed the order over them?"

Night sipped a mouth of tea, and leaned towards me, he returned in a low voice, "This 'Xiao San' in the mortal world is a phrase used to scold people."

As he said this, the old person behind the counter who was calculating on his abacus anxiously came forward with a menu, "This Master, the neighbouring table sits the three concubines of a very important and rich master in the city. They are gathering in my shop today. If you want anything, please order, but please don't ruin my shop!"

Mortals are so strange, why can I call "Xiao Er" (Little Two), but not "Xiao San" (Little Three)?

Since I did not want to calculate with them, I flipped opened the menu. The first dish was extremely shocking, it was called "Fruit Pancake". This caused the little heart of my fruit self to roll one round in the oil and shook my head repeatedly, "Too cruel! Too cruel!"

Night looked over and smiled consolingly, "This fruit is not referring to real fruits, it is only dough, only fried dough. Do not be scared."

Even so, this blood-soaked dish name caused my heart to turn in fear. I looked down and the next dish was called "Crab Meat Soup Bun". I love buns, so I ordered this dish and two bowls of soyabean milk.

In a flash, the shop assistant called "Xiao Er" came with a basket of steaming buns. I reached out for one, blew on it, and excitedly ate it.

This really proved that mortals are unreliable and do not go by the book. As Fruit Pancakes did not have fruit, who knew that Crab Meat Soup Buns had soup inside? And, quite a bit of soup, the soup juice accurately leaked and squirted onto Night's robes.

At a corner of the shop, a sound of laughter broke out.
I picked up my sleeve and wanted to wipe Night's robe, but he waved his hand and said, "It's fine. It's fine." A light flick of the robe and his robe immediately became new and clean again.

Night indeed is a generous and gentle god. Not only did he not blame me, he considerately picked up a soup bun, dabbed it with vinegar, and placed it on my plate. Thus, I safely ate the rest of the breakfast happily.

After the breakfast, Night brought me around the city. The night had turned dark when Night brought me back to the small courtyard, so that he could go to the birthday banquet. In all, the day had passed quietly and peacefully.

However, as good as Night is, there was one thing bad about him - even if he had to go to the birthday banquet, why did he have to put a boundary to trap me in the small house? This was very bad.

I pinched the boundary, and recounted one of the heart sutras Phoenix taught me, it seemed to contain a method to break the boundary. However, I did not know if my current cultivation would suffice to break Night's boundary. I chanted many different sutras, to break gold, to break wood, to break fire, to break earth --- but all were not effective. Only the breaking water enchantment was left, this looked hopeless. Deciding to try my luck, I silently chanted the breaking water enchantment, and suddenly a sharp light and "Hua La" sound rose, and the boundary vanished in a moment with water bubbles.

Not bad not bad! Gaining six hundred years of cultivation is truly not ordinary! I stepped out of the house, arranged my clothes, and prepared to go to the Heavenly Realms to check out the crowd. I called for a cloud at my feet, and then suddenly thought that with no one to lead me, I will likely only reach the Heavenly River when morning came. I decided to call for a soil god* to lead the way.

So I chanted an enchantment, and suddenly a person descended from the sky, narrowly crashing into me. Luckily, I dodged two steps back in time.

"Surprising, nowadays soil gods don't come from the soil?" I arranged my sleeve and lowered my head to see that my satin shoes had unknowingly been splattered with water stains.

The person opposite me broke out into laughter. This laughter was familiar and intimate.

I raised my head, the person was wearing a robe of green, he had a clear and brilliant gaze, indeed he was the laughing ("Pu Chi"-sounds of laughter) gentleman in the shop this morning.

Pu Chi! This person is truly cooperative, true to his name he broke out into laughter again, "Master Pu Chi, yes, this name is good. I like it! But I am not a soil god, but a water sprite from a jade water river outside this city. Why have this "Xiao Er" immortal summoned me here?"

Comments: Oooh, it's getting exciting. I cannot wait to reach the Heavenly Empress' birthday banquet!

*Local soil gods are usually summoned for directions as they are the gods governing the area and knows the place best.


** Pu Chi refers to the sound of laughter, so Jin Mi named this water sprite "Master Pu Chi "since he keeps breaking out into laughter.