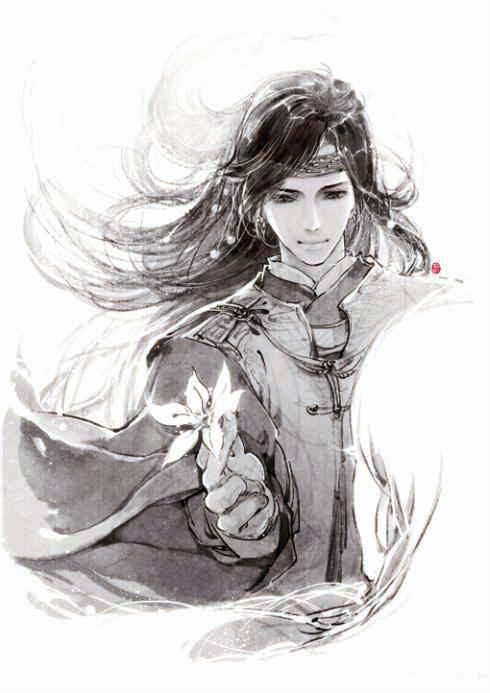 Thanks for the support :). The kind and warm comments keep me motivated! I'm still trying to settle down in Hong Kong and feeling a bit homesick. I think it's all the concentrating I have to do to try and understand Cantonese! It's giving me a mild headache.

So, strangely, what I've been doing to de-stress and get used to this new place is reading C-novels (ok, and doing lots of shopping haha). I'm gearing up to do some translations (before real work starts), so here's the summary for Chapters 4 and 5.

By the way, Szara has given some advice on accessing xiaoyuer's blog. I have not tried it out yet, but it sounds good:

For everyone who is having trouble with xia0yuer's tumblr-- the problem is caused by a program called Disqus, which makes my browser freezes. If you're using Firefox or Google Chrome, you can download the "NotScript" add-on which can block Disqus from loading.


Chapter 4: A Dream in the River of Forgetfulness

*I love how xiaoyuer translated the Moon God's place as the Estate of Conjugal Bliss, so I will use that phrase. I would have translated it as House of Matrimonial Fate instead but xiaoyuer's phrase is much more poetic.

When Jin Mi goes to watch chinese opera with the Moon God, she meets Lao Hu (the carrot immortal). Lao Hu wants to bring Jin Mi back to the flower world as he got scolded by the Flower Leaders for losing Jin Mi. So, Lao Hu brings Jin Mi back to Phoenix's palace and asks to take Jin Mi back. Phoenix asks Jin Mi if she wants to return to the Flower World and she says yes. Phoenix says very well since he has to go down to the Underworld as there has been disturbances down there. Jin Mi's ears perks up when she hears that Phoenix is going to the Underworld.

She tells Lao Hu that before she leaves she needs to take some Buddhist scrolls for her cultivation and Phoenix consents for her to take some scrolls. So, later that night, she turns into her grape form and hides in the sleeves of one of Phoenix's robes on his bed. Phoenix changes into the robe and goes to the Underworld (he clearly knows that Jin Mi is in the robe, and scares her for a moment by pretending he will wear another robe haha).

At the river in the Underworld, the old boatman asks if the immortal lady is steady before riding the boat. Jin Mi realises she is discovered and transforms back to her human self. Phoenix laughs at her. Jin Mi cups the water of the river and Phoenix whacks her hand - the water is from the River of Forgetfulness. The boatman mentions that he has guarded the river for hundred thousands of years but this is only the second time he has seen such a beautiful lady like Jin Mi. He mentioned that the lady was very sad and wanted to drink the water in the River of Forgetfulness but another guy came and pulled her away.

When they arrive at the shore, Phoenix catches Jin Mi who almost falls and he pauses when Jin Mi is in his embrace - then throws her off. Jin Mi catches up with him saying she is scared of ghost. Phoenix tells her that she is his maidservant, so he can protect her from ghosts. Phoenix casts a spell on Jin Mi to hide her real appearance.

They pass a stall where a demon is selling tails and ears that can change one's appearance. Jin Mi picks up a pair of rabbit's ears. As Jin Mi was going to walk away without paying, someone pays the demon for Jin Mi's rabbit's ears. This someone is his First Highness, the Night Deity. Phoenix is annoyed and throws the money back to the Night Deity and pays for Jin Mi instead.

Through Night and Phoenix's conversation, Jin Mi realises that Night Deity is actually the First Prince, the Dragon Night Deity and not a fish like she thought. Phoenix also realises that Jin Mi and Night met before.

Phoenix books a suite and Jin Mi as his maidservant sleeps in the outer room. When she collects a kettle for Phoenix, she sees Night's little deer in the stables and pities it (thinking it is also scared of ghosts) and brings him inside the suite to sleep. The next morning, she tries to feed the little deer grass and Night stops her saying the deer eats dreams and nightmares. The deer actually ate lots of dreams and nightmares last night and was bloated! Jin Mi brings out the deer and makes it spit out a dream.

The deer spits out something like a night pearl which dissolves into an image - it shows the old boatman on the river of forgetfulness... there is a man... who looks like Phoenix. A girl lifts up her head and gazes deeply at Phoenix. They kiss. They kiss for a long time until Phoenix finally releases her but still embraces her waist. She turns away delicately, her cheeks reddened.

Jin Mi thinks she looks familiar. She looks at her reflection in the little pond in the garden. After comparing, she realises that the girl in the image looks like her.

Chapter 5: The Secret Starts to Unravel

The dream image is slashed away by a girl who demands from Jin Mi the identity of the girl in the dream. She turns out to be Princess Liu Ying of the demon world, who is deeply in love with Phoenix. Jin Mi (disguised) tells Princess Liu Ying she doesn't know the girl and gives her directions to where Phoenix is after Princess Liu Ying asks.

Princess Liu Ying meets Phoenix and asks him who is the girl in his dream. Phoenix is angry and asks Night if his deer contravened the rules of heavens by daring to eat a high god's dream. It turns out that high gods will naturally have a barrier when they sleep so it's not possible for the deer to eat his dream... until Jin Mi realises that she had brought the little deer across the barrier when she had brought it inside to sleep. She starts to cough uncontrollably and Phoenix makes her stand behind him when Night uses his hand to comfort her back. Phoenix says that he cannot have his maidservant cause rumours for Night who is already engaged.

Princess Liu Ying asks Night who has the honour to be his fiancee, and he says with a shadow on his face that she is the eldest daughter of the Water God. Princess Liu Ying queries if the Wind Goddess and Water God are still childless... and everyone falls silent.

Night and Phoenix captures the two demons and Phoenix traps them in two gourds which will  cause the demons to vanish into dust after a few days. Jin Mi was annoyed because they did not let her follow them and casted a spell to immobilize her. Night had to return to the heavenly realms for some duties while Phoenix remained in the Underworld with Jin Mi. Jin Mi thinks Phoenix is very strange, because other then when Phoenix went to catch the demon, he cast a spell causing her not to be able to be away from him further than 100 steps.

Jin Mi decides to eat the internal essence of the two demons since she cannot eat the internal essence of Phoenix. Jin Mi removes the seal from the gourd and one of the demon is released! She is about to be attacked when Phoenix saves her - he uses his Red Lily Fire against the demon and the demon starts to die... but then Phoenix suddenly stops using the fire when he realises it was affecting Jin Mi adversely. So, Phoenix puts up a protective barrier for Jin Mi and fights the demon with a sword. He kills the demon with the sword (actually one of his feathers) despite the demon playing dirty tricks and trying to use Jin Mi against Phoenix.

After the battle, Phoenix is angry at Jin Mi, but can't do anything but flick her forehead. Jin Mi realises that Phoenix is injured - he has been hurt by the demon's Plague needles when he was trying to protect her. Princess Liu Ying comes into the room at this moment after having heard sounds of a fight - she is horrified when she realises that Phoenix has been hurt by the demon's Plague needles and says she will dash immediately to the Flower World to get the sacred ganordema (ling zi mushroom) which can heal him. Jin Mi realises that if Phoenix was not cured within 49 hours, he would be destroyed by the poison from the Plague needles.

Phoenix says that the Flower World has a grudge with the heavenly realms and will not release the sacred herb. Jin Mi wonders what was the big deal for some simple grass - she takes out a red thread from her pocket and asks Phoenix what will he do for her if she makes the special herb. Phoenix stares at her for a moment then ignores Jin Mi and starts to meditate.

Jin Mi was indignant at being ignored and underestimated so she starts to think about what a sacred ganordema looks like... and a reddish mushroom is born! She happily brings it to Phoenix, who studies it with an unclear expression. Phoenix says that Jin Mi has made a shitake mushroom. So, Jin Mi starts to make all kinds of mushroom grow on the floor. Phoenix tells Jin Mi that he will give her two hundred years of cultivation if she makes the sacred ganordema (ling zi).

Jin Mi bargains for three hundred years of cultivation and Phoenix agrees. She starts to make tons of plants... and then out grows a sacred ganordema. Phoenix is shocked and asks what was Jin Mi's identity icily. Jin Mi thinks Phoenix is becoming delirious as he keeps asking her who she is and what her relationship is with the Flower Goddess. Jin Mi realises she must knock him out to feed him the sacred ganordema or he will die and she cannot get her cultivation, so she decides to... kiss him.

When her arms surround his neck, she chops him in one fell swoop. She casts a spell to put Phoenix on the bed and applies the sacred ganordema on his injuries. She falls asleep by his bedside. She wakes up thinking she is pinching a pest that wants to eat her grape self, only to realise it's Phoenix's finger. At this moment, Princess Liu Ying returns with the First Flower Leader from the Flower World.

The First Flower Leader is furious at Jin Mi. Phoenix tells her it is not Jin Mi's fault as he had fallen into the Flower World and Jin Mi had followed him later. The First Flower Leader says he cannot dare touch any female immortals in the Flower World. Phoenix admits that his heart is with Jin Mi (**he uses this very lovely phrase, 心之所系 - 系 meaning ties, relationships, a connection - it is as if he is saying his heart is now connected with Jin Mi).

Jin Mi does not understand what Phoenix means by 心之所系. Princess Liu Ying looks like she wants to cry and the First Flower Leader takes Jin Mi away. Phoenix says he will go to the Flower World to see Jin Mi again. Jin Mi asks when since she wants her 300 years of cultivation.

Phoenix smiles and says the day after tomorrow.