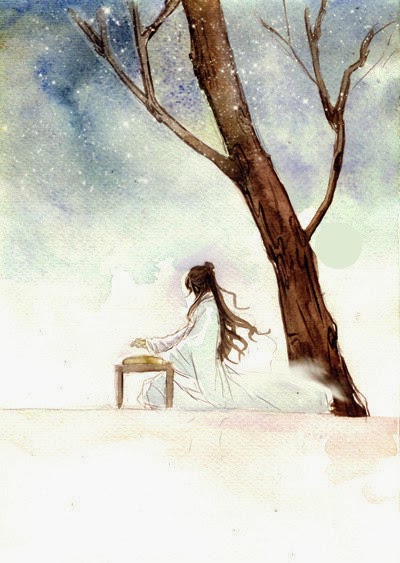 Woohoo, this will be the last summary and the translations can officially start.

So, the little soil god brings Jin Mi to an underground gambling den and teaches her Mahjong! Hours later, they get kicked out of the gambling den as their luck was too good! The little soil god then decides to bring Jin Mi to a brothel (haha). But before the courtesans could appear, Jin Mi starts to escape as she heard that one of the courtesans is called Mu Dan (a type of flower -peony) and thought she was one of the Flower Leaders!

The little soil god is confused as to why Jin Mi wants to run away then he makes the conclusion that Jin Mi is actually interested in guys! So he brings her to a brothel that has male courtesans (haha). At the male brothel, Jin Mi meets... Phoenix! Jin Mi asks Phoenix if he has come here to seek pleasure and he tells Jin Mi coldly that he has come to find her. Phoenix was so angry to see Jin Mi with the male courtesans that he sets fire to the male brothel.

A thunderstorm comes and extinguishes the fire quickly. The great Water God had arrived to stop the fire. The great Water God scolds Phoenix for setting fire to the brothel and potentially causing the loss of human lives. Phoenix apologises. Jin Min notices that Phoenix looks a bit scared, so she decides to help him since he still owes her three hundred years of cultivation. She tells the great Water God that Phoenix wanted to set her on fire but had missed and accidentally caused the whole brothel to burn instead (although this was not true, since the fire that had set the brothel ablaze was ordinary fire and could not hurt Jin Mi or the little soil god). Phoenix mutters to himself that he must as well set himself on fire if he wanted to set her on fire.

At this point, Night descends from the night sky. Night greets the great Water God and the great Water God grandly excuses himself and flies off. Phoenix accuses Night of being the one who stole Jin Mi away. Night said he was merely helping a friend who had been imprisoned.

Jin Mi tells Phoenix and Night about the four great pleasures of the mortal world and offers them osmanthus (a type of flower) wine that she made. Under the full moon, Night, Phoenix and Jin Mi start to drink her osmanthus wine as the little soil god apologises for what he has done. Phoenix says that it is lucky that Jin Mi's heavenly essence is still intact and tells the little soil god to go and tend the ovens of Lao Jun (another god)***.

They drink and Night praises Jin Mi for her skill in brewing the wine. Night says that when the flower that Jin Mi gave him, Beautiful Night Scent, blooms, he will seek her advice on how to brew it. Jin Mi agrees - Phoenix is cold and silent throughout this.  Five jugs of wine later, Night falls drunk first. Jin Mi places Night on the Nightmare Beast and the Nightmare Beast flies off to Night's palace with Night on its back. After twenty jugs of Jin Mi's wine, Phoenix is still not drunk - Jin Mi is surprised. So, she asks Phoenix to pass her the three hundred years of cultivation.

Phoenix did not respond - his cheeks were red and his eyes slightly glossy. Jin Mi pokes Phoenix and he falls onto her shoulder. Jin Mi then realises that Phoenix had long been drunk. So, Jin Mi struggles and carries Phoenix to the bed in the side room. Jin Mi thinks that Phoenix looks like a child when he is drunk, so she squeezes his cheeks. At the height of Jin Mi's enthusiasm, Phoenix opens his eyes suddenly, gives Jin Mi a swift and fierce glance, and cries, "Little Demon, where do you come from?"

*In chinese, when one asks another if she or he is "eating vinegar" - they usually mean "are you jealous?" Because vinegar is sour - so it is insinuating that the person is feeling jealous hence feeling sour haha.

**Literally, the chinese word is translated to whoring. But I dislike the term.

*** Lao Jun is literally translated to Old Gentleman - he is in charge of making red pills. Although it is not yet explained, these red pills/pellets have special powers and uses for the gods.

Comments: The moral of this chapter is to not make Phoenix angry. Haha.
Posted by Decembi at 12:41