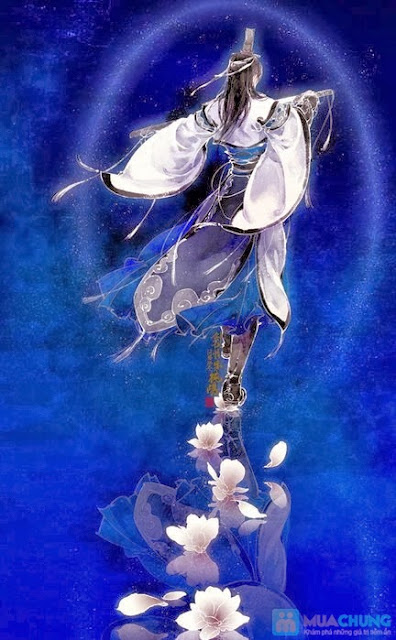 Dear readers, sorry for the slowness in updates! I have been very much under the weather and having a slushy brain. But, I'm getting better and I hope the Summary of Chapter 6 will do for now.

Additionally, I don't have that many pretty ancient chinese fantasy pictures - I will be grateful if readers could send in pictures at onesecondspring@gmail.com to be used for the future entries! I really love the picture above... and thought it really looked like how Night Deity would be - crossing the night sky alone... leaving white flowers in his wake.

Now, on to the summaries:

Chapter 6: The Mortal World in An Instant

The Flower Leader makes Jin Mi kneel before the Flower Goddess's tombstone. She warns Jin Mi not to lie. First, she asks Jin Mi where her Spirit Sealing Hairpin went and Jin Mi said she lost it. She then asks Jin Mi how many people have seen her real appearance besides Phoenix and Jin Mi starts to name many gods like the Moon God, the Night Deity, etc...

The Flower Leader puts her in a room with three magical amulets at the door to prevent her from escaping. Jin Mi waits for Phoenix, believing that he will come. In a dash of seven coloured lights, Phoenix makes his grand entrance in the Flower World. The Twenty Four Flower Leaders are present and asks why he has barged into the Flower World without permission again. Phoenix says he is here to fulfill his promise to Jin Mi, someone he admires.

The Flower Leader tells Phoenix to give up his hopes and to ask the Heavenly Jade Emperor himself --- everyone is ok for Phoenix, except Jin Mi. Phoenix is confused for a moment than thunderstruck... he pauses... is Jin Mi... the Flower Goddess'....

Phoenix looks absolutely lost as he leaves the Flower World in confusion.

Jin Mi grows bored in her room and wonders who will free her. A few days later, she sees a meteor light and makes a wish to escape. Suddenly, an elegant figure on a deer, the Nightmare Beast, appears in her courtyard. It is Night.

Night asks if Jin Mi wants to join him? So Jin Mi eagerly follows Night, she sits on his Nightmare Beast and Night leads the Nightmare Beast as they cross the starlight and the heavenly river. Jin Mi says Night must be quite lonely since he is on duty when everyone is asleep and only has this mute Nightmare Beast for company.

Jin Mi tells Night that she sleeps late so he can find her or she can find him when he is lonely, and they can be lonely together**. Jin Mi asks where Night lives.

Night's eyes sparkle. He tells her his palace is at the end of the rainbow at An (暗 - the chinese word for Dark) Forest. They had met around the boundary of An Forest previously.

Jin Mi passes Night a seed from her pocket. She tells him this is a flower*** that blooms in the night and retracts its petals to sleep in the day - just like Night, so it can accompany him.

Night places it in his chest pocket carefully and thanks Jin Mi.

Jin Mi asks if she can go stay at Night's palace and not return to the Flower World. Night says yes, but as the Flower Leaders will be looking for her, it will be better for her to go to the mortal world. So Night brings Jin Mi to a hut in the mortal world and changes her appearance to a man.

The local soil god appears to greet Night and says he is honoured to have the arrival of such a great god. Night asks him to take care of Jin Mi as his esteemed guest. The local soil god eagerly agrees, then says he has poor eyesight and that Night and Jin Mi can continue... and quickly leaves.

Jin Mi is confused and asks Night to continue. Night does not know whether to laugh or cry and massages his temple.

** The literal translation is more like Jin Mi says we can accompany each other. But, I found it more lovely to translate it as lonely together.

Comment: This chapter is for the Night fans :) and one of my favourite chapters ever. I could imagine how Night felt when Jin Mi tells him - they can look for each other, and be lonely together. One warm word in his long lonely existence --- and when he kept the seed, I'm sure it was at the bosom of his heart.