仗剑一笑踩蘑菇 by 囡囝囚团 (With One Smile, the Sword Tramples the Mushroom by Nan Jian Qiu Tuan) (Review + Translations of Prologue & Favourite Scenes) 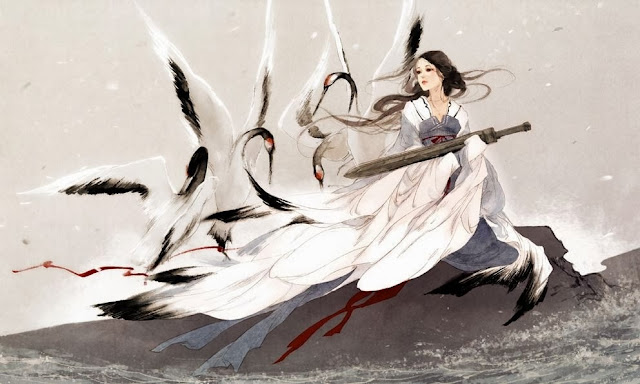 In the six realms, there is god, demon, immortal, spirit, mortal, ghost.


"What an ugly mushroom," Someone furrowed his brow and walked away.


This caused the small ganodema to be a laughing stock among the other creatures on Soul Spitting Cliff. Until one day, a wash of white light fell from the sky. It caused her to save 500 years of cultivation and immediately took human form - she became a baby and was carried away.


"How can there be a baby on the Soul Splitting Cliff?" Someone asked finding it strange but could not find any answer. The ugly mushroom can no longer be seen. He laughed, "You shall be called Gu Xiao Mo (taking Mo from mushroom)".


Darn! Even after one big transformation, she was still a dry shrivelled mushroom.

The synopsis is largely modelled after the prologue, but there's an extra bit:

It turns out that he and her were both monsters. Under this big sky, it is afraid that there is no space to hold them.

What is spirit, what is demon, what is immortal, what is mortal?


After expending all their efforts and everything they had, all the two monsters wanted was to gain some warmth from each other.

Warning - review is full of SPOILERS:

At shusheng bar, I've commented largely on the flaws of the book - the plot and pacing is quite slow (3-3.5 stars), but what made it special for me is the main couple - Little Mushroom and Yu Liu (his name is made up of words suggesting fragance and beauty).

To me, they are a five star couple.

Little Mushroom is a mushroom spirit, in which a small immortal who had descended to become a demon had taken possession of part of her spirit. This small immortal is made from one of the stones of Nu Wa (the great mother goddess), she is made of the same material of the Heavenly Sword - the most powerful sword in all of the realms. She descended to become a demon because she fell in love with a the great god, Zi Wei, and this was against the laws of heaven. They locked her up and she stole the Heavenly Sword and caused great chaos.

Yu Liu is the reincarnation of the Dragon God, the ruler of all the heavenly creatures. When his birth was forecasted, the world fell into chaos to gain him. His whole tribe was killed off. He was then locked up by the Jade Emperor - he was released by the small immortal. From then on, in Little Mushroom's dreams for 10 years, she inexplicably dreamt of him - not knowing, who is this beautiful man?

Through their journey together, Yu Liu saw how Little Mushroom refused to bent down to fate. How she would smile whenever she was sad, and hid her weaknesses and loneliness from the world. How she tried to love the world even when the world saw her as a monster. Suddenly, all he could see was her.

"It turns out that you me... both are monsters," He said lightly, without coldness, without pushing anyone away. Little Mushroom paused, and forgot to smile. As the smile left her lips, it slowly appeared on Yu Liu's lips.

Suddenly, the dawn of the sun in the sky, the hundreds of lights bursting through the clouds, even those cannot beat the softness of the smile that was spreading on his face.

"I rather smile and die..." Little Mushroom dazedly murmured as she stared at Yu Liu. The first time she saw his smile and she was enchanted - she could not move, could not speak, could only look at his sparkling eyes.


Yu Liu gazed at her back, as if he wanted to fiercely capture her expression in his heart.

Yu Liu was a person who disdained and distrusted the world - it had forsaken him even as it wanted his power. The thing he hated most was to be imprisoned against his will - but for her, time and time again, he risked his freedom, he gave what he could, just for her.

In the midst of battle, when she was all alone, and she was sure no one will protect her - a fierce thunder attack was coming and she thought she will die...

The huge thunderous sound vanished. The heat was gone. Little Mushroom opened her eyes in shock. She raised her head and saw Yu Liu in front of her. He was holding an umbrella and smiling at her.

His hair had gone crazy and was flying in the sky. His green robes were flying, like the thunder light, ferociously beautiful, but also like a hazy illusion.


She froze and asked an irrelevant question.


"Where did you get the umbrella?"


"You don't have to cover me anymore, I will not fall sick."


She shyly looked at Yu Liu, fresh blood suddenly came out of his mouth, but the laughter in his eyes did not dim.


Yes, cold. All these years, she was so cold until she did not realised it anymore.


The tears started falling. But this time, she did not force herself to smile.


The sound of her heartbeat.


What is this feeling, so strange. But Little Mushroom could not think of anything else but the blood in his mouth. She was so angry that she could suffocate. But she could not lift her arms and could only gaze at him - her heart beating furiously but also painfully.


He had shielded her from her front - his body seemed not able to stand on its own, and he held a wooden beam.


"You once asked me who you were..."Yu Liu had used his back to take the thunder spell, but acted as if nothing had happened, just smiling as he looked at her, the blood in his mouth becoming redder and redder.


"I say, you are you, dry shrivelled mushroom..." His dark eye eyes became darker with a light touch of regret. His long fingers pointed at her heart and lightly said, "Whatever you are... you are here."

Little Mushroom goes to save Yu Liu with one of the special herbs that breaks one of his two seals. When they re-unite, everything is different. Little Mushroom knows that she likes Yu Liu - but she is shy and a little bit depressed, because she is plain (even ugly) and he is the most beautiful guy she has ever seen. One day, she asks him to paint her - he can't paint so he paints a weird squishy thing. She is happy and sad at the same time - every girl wants to be beautiful in her special person's eyes. But she cannot see the expression on his face when he looks at her look at the painting. Yu Liu secretly learns how to paint later - and when he leaves again, after saving her, because the soldiers from heaven will be coming to chase him - that painting is left.

Little Mushroom  now knows Yu Liu's heart. She declares that once she finds him, she will never let him leave again.

Many things happen.... when Yu Liu asked Little Mushroom to trust him, she still protected him and loved him - but to resolve the misunderstanding, they had to go to the heart of the enemies' headquarters. There was a trap - and to save her, Yu Liu got poisoned. He became blind. He became deaf. Finally, to save her home, he completely sacrificed himself. He broke free of his human body, with the determination of death, and became the all powerful dragon god to save her and her home.

Little Mushroom searched for his human body - then protected it for ten years. It is said that her faithfulness shook the heavens and he came back alive.

Where they are, how they are - no one knows. Although sometimes, some people in some streets are said to have seen a green robed figure placing a hair pin into a grey-robed girl's hair. Their hands tightly entwined, their bodies gently leaning towards each other.

Email ThisBlogThis!Share to TwitterShare to FacebookShare to Pinterest
Labels: Reviews, Translations, With One Smile The Sword Tramples the Mushroom