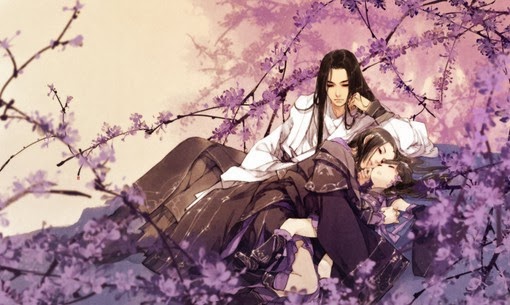 In my previous summaries (gosh, I really need to learn how to summarise briefly), I highlighted some of my favourite parts and what I thought was pivotal moments for me as a reader.

Actually, what really struck me while I was reading 3L3W, 10 Peach Blossoms was that it used one of the well-loved conventions - couple parts due to some misunderstanding, a child is born out of the relationship and stays with a parent (usually in secret), they re-unite again usually because of the child, and get together! I've read a few modern c-novels using this convention and they are usually more fun than usual because of the child - who is usually extremely cute, intelligent and usually solves all the obstacles that riddled the couple previously, eg, misunderstandings from miscommunications or parental objections.

So, the story uses the couple meet again with child convention but in a fantasy construct and this actually is more imaginative - because the child is from the female lead's past life! Also, it was more novel in this case because the child is left with the father and Ye Hua is truly a doting and adorable father.

What I really liked about Tang Qi Gong Zi is how she subtly weaves in details or the emotional states of the characters in their actions or seemingly throwaway lines. Rarely, does she explicitly say why the characters do a certain action or how they feel directly through the characters themselves, and the side characters then usually act as the chorus and provide the exposition - for eg, Immortal Zhe Yan coughing or making some awkward action when Mo Yuan acts out of character with regards to Bai Qian Qian's news of her engagement or Little Dough when Ye Hua acts out of character because he is jealous.

But Tang Qi Gong Zi also has a lot of rather tangential plot lines that are often unsatisfying because they don't serve the main plot as effectively as perhaps the reader will like. For eg, the synopsis talks about Bai Qian Qian having five peach blossoms and you get this strange misconception (well I did haha) that the female character will go through several intense relationships but this is not true at all - in fact, the only other viable male lead, Mo Yuan, to Bai Qian Qian besides Ye Hua is not even listed as one of the five peach blossoms. So, I thought that plot was rather redundant - and even the romantic sub plot with the Demon King Li Jing was rather... half-baked.

The other tangential plot with Bai Qian Qian going down to the mortal world and Ye Hua looking after her... was also rather weak. Although, it does have some relevance down the line with The Pillow Book - I thought it was weak because it did not serve as an emotional engine or catharsis to Bai Qian Qian and Ye Hua's relationship... which just kind of meandered during these sub plots, when I wanted them to explore more interesting things because gosh, their relationship angst had so much more potential!

But, at the end of it all, I really loved this c-novel which was largely unpretentious, of relatively good length and kept its spirit from start to end.

I wondered if Tang Qi Gong Zi had planned to trick her readers from the start - because I think many (just like me) thought that Ye Hua was a reincarnation/another lifetime form of Mo Yuan. This actually makes more sense with the title - Three Lives Three Worlds - I thought it was quite beautiful - A' Yin and Mo Yuan, Su Su and Ye Hua, Bai Qian Qian and Ye Hua - their love story spanning three life times - Ye Hua always loving Bai Qian Qian even if she could not see it in its real form. But, the rug got pulled under my feet when it was revealed that Mo Yuan and Ye Hua was twin brothers!

I still preferred the reincarnation theory (haha), but I also found the official version sweet, because Ye Hua actually fell in love with Bai Qian Qian when he saw her as A'Yin through Mo Yuan's consciousness when he was still an embryo. So, their fate was in a way linked through three lifetimes.

Bai Qian Qian was a female heroine I could root for. She was a pretty careless (I won't use callous haha) mother to Little Dough and that is really her failing. But, she was a woman of action - and I like that, and she never allowed herself to be bullied or cheated or mis-used. Her coldness to Ye Hua and her refusal to be aware of her feelings could be understood through Demon King Li Jing breaking her heart, but I think also a subconscious bitterness that flowed from her being Su Su and believing she was utterly betrayed by Ye Hua in her past lifetime, which had caused her to freeze her emotional state.

However, I loved 3L3W, 10 Peach Blossom in the end because I love Ye Hua. I thought Bai Qian Qian's realisation of her love and awareness of Ye Hua at the end, when she realised how blood soaked his black robes were was very beautiful. She could not see that Ye Hua's black robes were blood soaked until he collapsed - how hurt and injured he was, because Ye Hua from start to end was a man who hid his vulnerability. Sight played a big part in this novel, and I think it was not just physical sight but emotional perception - even when Su Su had her eyes, she could not see the reason behind Ye Hua's actions and his real feelings (not really her fault since this was deliberate manipulation on Ye Hua's part), and even when Bai Qian Qian gained back her eyes, she still could not see - she only knew that she still love Ye Hua but could not forgive him for not trusting her, for not knowing her.

But, at the end, she realised - but did I know him too? Ye Hua, with his black robes, and equally dark heart. At that point, I think she realised that there are many things both of them might not know of each other, but one thing is for sure - that through two lifetimes, they loved each other more than life and death itself. And even if memory fades, and even if everything else changes, they will still meet and love again, when the peach tree blossoms.
Posted by Unknown at 22:52