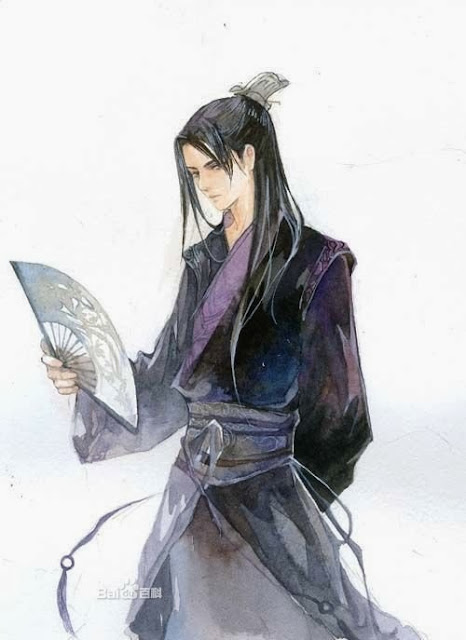 I don't think I have actually stated this but Mo Yuan and Ye Hua actually look alike! Haha. When Bai Qian Qian first met Ye Hua, she was stunned at how much he looked like Mo Yuan. So the picture above is what I imagine Ye Hua and Mo Yuan to look like.

I wanted to summarise faster but I loved Chapters 16-18 so much that I went into greater detail of Ye Hua's angst. I know that many people don't actually like Ye Hua, but I love him to bits (more in my review) and I think the following chapters beautifully show how Ye Hua loves a woman who he thinks loves another man.

The chapter starts with Bai Qian Qian in Ye Hua's palace in Jiuchongtian. Nainai, Bai Qian Qian's personal servant when she was still Susu, sees Bai Qian Qian and is extremely moved as she recognises her and says she has finally returned. Ye Hua stops Nai Nai as Bai Qian Qian is confused by Nai Nai's reaction.

Little Dough has drunk a bit too much and is unconscious. Bai Qian Qian ask Nai Nai to let him sleep it off. She goes to find Ye Hua in his study. When she is there, she realises two women are already there - Concubine Su Jin and the princess that had bugged Ye Hua earlier. They are begging Ye Hua to let the princess stay as a maid. Bai Qian Qian realises Ye Hua is especially angry and wants to chase the princess away because she had drugged his soup with a love potion (I think the connotation is to make him amorous and want to have intimate relations with her), but Ye Hua found out the soup was drugged before he drank it.

As Ye Hua sends Bai Qian Qian back, he asks her why she advised the princess to return to her kingdom. Bai Qian Qian said it was because Ye Hua had expressed his intention to send her back. Ye Hua is disappointed that Bai Qian Qian had only said it because he had said it and not because she was jealous.

Bai Qian Qian sees he is disappointed and immediately clarifies that she will still find a mistress for him and he can marry whoever he wants. Ye Hua is silent for a long time and finally says cooly that he knew he should not have asked her that question or tried to make her jealous by asking her to come to the study.

He says, "I have no weight in your heart. Bai Qian Qian, can your heart only store one person? How long do you plan to wait for him?"

Bai Qian Qian feels a reaction in her heart. Ye Hua leaves with a dejected expression. They part.

In the middle of the night, Nai Nai comes to find Bai Qian Qian as Little Dough has still not woken up. Bai Qian Qian assures Nai Nai that Little Dough will be fine and a doctor need not be called. She says the fact that his face is getting redder and redder is a good sign. Nai Nai feels more assured and leaves.

In the next day, around noon, Ye Hua finds Bai Qian Qian and chastises her for not informing him that Little Dough has been drunk since yesterday and for not calling a doctor. Ye Hua accuses Bai Qian Qian of not loving Little Dough like a real mother. Bai Qian Qian is hurt and rebuts that he can get Concubine Su Jin to take care of Little Dough instead. Ye Hua says that was not what he meant and leaves.

Immortal Zhe Yan tells Bai Qian Qian that a part of Mo Yuan's soul is back and is now residing in the West Sea King's son's body. Bai Qian Qian hears this and starts crying.

Although Bai Qian Qian is angry at Ye Hua, she leaves a note to explain that she is leaving and leaves with Zhe Yan to the West Sea King's palace.

Bai Qian Qian meets the West Sea King's son who is weak and sick. She is able to detect a part of Mo Yuan's soul in his body. She realises that if Mo Yuan stays in such a weak body, it would take him an extremely long time to combine his whole soul together again. Thus, Bai Qian Qian plans to get the special heavenly treasure, the Jie Po lantern, which will combine his soul together in 3 days.

However, just as Bai Qian Qian planned to make a trip to Jiuchongtian to plead for the Jie Po lantern. It is announced that an important guest has arrived at the West Sea King's place. Bai Qian Qian is brought to meet this important guest and she wonders who he can be as his rank is more important than the noble Immortal Zhe Yan.

Bai Qian Qian is surprised when she sees Ye Hua. Ye Hua grabs her and pulls her into his embrace. When she tries to struggle out, Ye Hua tightens his embrace. He traps her against a pillar and bites Bai Qian Qian's neck. She is stunned. Slowly, her hands embraces Ye Hua.

Bai Qian Qian is hit by a fragment of her past memory as Su Su but she dismisses it. Ye Hua opens her robe and kisses the scar on her chest that was left when she plunged a knife to feed Mo Yuan her blood. Ye Hua finally lets Bai Qian Qian go and she reaches out to slap him. However, Ye Hua catches her slap in mid grasp and pulls her into his embrace again.

Ye Hua's hand is placed inside her robe on her heart. His face is white as a sheet, his gaze steadfast, he asks, "Bai Qian, is there even half a space for me in here?"

Ye Hua asks twice but Bai Qian Qian does not know how to answer. Her head aches.

Ye Hua states that the person she has been waiting for has returned... naturally there is no space for an outsider. It was but his vain hope.

She states she plans to go to Ying Zhou to get the special heavenly grass so that she can give Mo Yuan 70,000 years of her essence so that he can quickly wake up.

Ye Hua tells her she is crazy. The special heavenly grass at Ying Zhou is guarded by four fierce heavenly beasts and even if she manages to survive them and get the grass, she will definitely be severely hurt.

Ye Hua looks pained as he asks if Bai Qian Qian is willing to give up her life for Mo Yuan.

Bai Qian Qian thinks what Ye Hua is saying is strange because if she cannot pass the four fierce heavenly beasts, she does not plan to risk her life but will just patiently wait for Mo Yuan to wake up over seven or eight thousand years. She ponders and then thinks that perhaps Ye Hua is worried that she will not be able to survive the fire and lightning trial when Ye Hua is crowned the King of the Heavenly Realm as if she becomes the queen, she will have to go through the trial with him.

Bai Qian Qian tells Ye Hua that they can treat their engagement as broken.

Ye Hua is silent for a while, finally, with his back to Bai Qian Qian he tells her to come to his room tonight if she wants the Jie Po Lantern.

Ye Hua nearly hits into a crystal pillar on his way out and Bai Qian Qian asks him to be careful. Ye Hua tells Bai Qian Qian that it was all his hopeful wish, how much he owed her, how much she owed him, has already been messed up and cannot be calculated within life's fortunes.

Comment: Chapter 18 was so wonderfully angsty <3. Ye Hua prides himself for always being in self control (afterall, he was made the crown prince when he was born!) and actually hides his real feelings very well; so it's lovely to see how Bai Qian Qian makes Ye Hua go out of control.