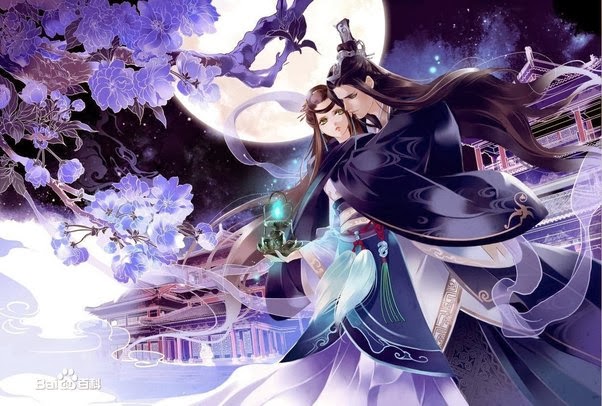 The chapter starts with Bai Qian Qian relating about how Ye Hua forces her to take a walk around her Fox Cave every morning, and she's happy because it is raining this morning so they won't have to walk. But, she wakes up and Little Dough bounces on her while she is on bed. They are going to walk in the mortal world today!

They go to a tea house to drink and eat, and one of the nuns that was saved from the horse carriage sits at the table and thanks Ye Hua. Ye Hua and Bai Qian Qian is surprised because the nun is able to tell that Ye Hua is a god. The nun subtly asks for Ye Hua's name to thank him if one day she becomes a deity but Ye Hua declines. Bai Qian Qian is surprised again at how Ye Hua is able to attract admirers everywhere, even a nun!

Ye Hua comes back and they all stay at an inn. There is only one room. They order supper but it's not to her taste (she has been spoiled by Ye Hua's cooking) and decides not to eat. As Bai Qian Qian falls asleep, Ye Hua is doing work on the table. In the middle of the night, Bai Qian Qian feels someone hugging her as she sleeps and hears a voice saying faintly, "I have always known your temper, but I never knew you would be so cold. You have forgotten everything in the past, I hope you remember, yet also wish you will never remember."

When Bai Qian Qian wakes up, Ye Hua is already at the table doing work. Little Dough asks her to eat porridge that Ye Hua cooked. Ye Hua says he cooked because he was afraid Little Dough would not be able to get used to the food. Little Dough protests that that is not true because Ye Hua never cooked when they visited the mortal mountain and he wasn't used to the princess' food. Ye Hua coughed and Bai Qian Qian lowers her head and eats the porridge.

Ye Hua is back at JiuChongTian and Bai Qian Qian and Little Dough misses his cooking. So, they decide to get a disciple to learn from Ye Hua's cooking. A huge crowd gathers to become Ye Hua's disciple such that Bai Qian Qian decide they will have a battle to determine who can become Ye Hua's disciple. However, when Ye Hua comes back he rejects all of them. He says they don't have the potential, but she has. However, she does not need to learn, since of the two of them, it is enough if one of them knows how to cook (aww).

Basically, Qi Qi's son is born as the Emperor's son. However, as the god in charge of reincarnation of the human life really dislikes the Second Prince, he has written a horrible fate for Qi Qi's son. He will have to suffer a love trial. During one outing with the Emperor, he will jump down to save a beautiful girl drowning - he will fall for her but the Emperor will fall for her too and marry her. One drunken night, he will consumate his love with that beautiful girl and feel guilty for the rest of his life. Later, the son of the beautiful girl fight with him for the throne and he kills that son. That son turns out to be his real son. Hence, his life will be absolutely tragic.

The rest of the chapter relates to how Bai Qian Qian goes to the palace and tries to figure out how to change his fate.

Ye Hua comes down to earth and tells Bai Qian Qian how to save Qi Qi's son's fate - basically stop him from saving the beautiful girl and letting the Emperor save her instead. So Bai Qian Qian gets Qi Qi to get someone to push the Emperor in when the time comes. Chapter 10 is not that interesting and it also has a small side story - Bai Qian Qian meets Feng Jiu (the lead for the Pillow Book) who has come down to the mortal world to help the mortal reincarnation of Donghua Dijun, who is the emperor in this lifetime (it's revealed in the Pillow Book that that wasn't actually him though haha). Anyway, Bai Qian Qian successfully saves Qi Qi's son fate and she can return to heaven! Feng Jiu unfortunately though because of Bai Qian Qian's plans have to stay on with the Emperor.

When Bai Qian Qian returns to her Fox Cave, she discovers that Little Dough and Mo Yuan has been taken away! Xuan Nu who looks like her had impersonated her and stolen them away. Bai Qian Qian takes out her special fan and angrily heads to the Demon King Li Jing's Palace to confront Xuan Nu. When she is there, she realised that Xuan Nu has kidnapped Mo Yuan's body so that she can put her dead son's soul in Mo Yuan and be re-born. Xuan Nu orders the demon soldiers to kill Bai Qian Qian.

Bai Qian Qian starts waving her fan and going on a rampage. She's at a disadvantage because of her eyes and Xuan Nu using an extremely brilliant pearl to stop her from seeing. Bai Qian Qian is so angry, she doesn't care about her eyes and she gets very injured. However, she kills all the soldiers and is about to kill Xuan Nu when Xuan Nu is saved and Bai Qian Qian is almost given a mortal blow.

In the nick of time, Ye Hua comes and protects her in his embrace. Demon King Li Jing is shocked when he realised he almost gave Bai Qian Qian the mortal blow. Ye Hua asks if the actions of Demon King Li Jing's wife, Xuan Nu, is official or personal. If official, this means war between the heavens and hell, if it's personal, Xuan Nu must be put to death. She has kidnapped the son of the Crown Prince, Little Dough, and Mo Yuan, the highly respected noble god, the son of the Eternal Father God.

Demon King Li Jing is unwilling and Bai Qian Qian decides to do what Xuan Nu hates most of all, Bai Qian Qian removes the spell that gave Xian Nu her face and Xian Nu is given back her original face. Xian Nu sees this and goes crazy - she tears out her eyes.

Bai Qian Qian is back in her home and recuperating. She gets a love confession from some male deity that she thought always hated her - he declares he is willing to protect her as Ye Hua can't. She is shocked and rejects him in the presence of Ye Hua.

Ye Hua tries to test Bai Qian Qian's feelings for him, but she only reveals that she doesn't dislike him and even if someone else was her fiance, if she dislike him, she would not let him stay at Fox Cave. Ye Hua confesses that he loves Bai Qian Qian and she is stunned.

Bai Qian Qian rejects him - saying she's an old 140,000 years old goddess while he is 50,000 years old and would grow out of this feeling. She reassures him that even after they marry, she won't object if he wanted to find concubines or remarry goddesses of his own age. Ye Hua's face turns cold and his heart is especially bittersweet.

Bai Qian Qian dreams of Mo Yuan. She remembers how she was first made his disciple, how she thought he was too pretty (haha), and how he took care of her when she was extremely drunk after Demon King Li Jing broke her heart.

When Bai Qian Qian wakes up, Ye Hua is no longer in her room. She goes to the cave to visit Mo Yuan's body and to make sure he has been placed back properly. After the visit, she wanders to a spring and decides to take a soak.

She suddenly hears Ye Hua angrily calling her "Bai Qian" and he jumps into the spring and hugs her. Ye Hua kisses her. Later, Ye Hua says softly that he thought she was jumping into the lake to commit suicide.

(Aww because he remembers how Su Su had jumped off the platform in heaven and died!)

They return back to the Fox Cave. Later, they learn that Demon King Li Jing is waiting at the entrance for Bai Qian Qian. Bai Qian Qian refuses to see him, saying that everything has already ended between them.

The next morning, Bai Qian Qian walks out of the cave as she is heading to Ye Hua's palace in JiuChongTian, she sees Demon King Li Jing and is surprised that he is still waiting there. She decides to end it cleanly once and for all with Demon King Li Jing. She confesses that Demon King Li Jing was the only man she loved in her past life, but she knew that he was no longer in her heart in the moment when she was about to die in the cave while saving Mo Yuan with her blood - the face that came into her mind was not him. Demon King Li Jing heartbrokenly accepts Bai Qian Qian's final words to him.

Ye Hua and Bai Qian Qian arrive at his palace by the back door as Ye Hua is hiding from his official duties. Bai Qian Qian at first thinks she was brought to the Jade Empress' Peach Garden because she smells peach blossoms. Ye Hua is stunned for a moment, and tells her the Peach Blossom tree is something he planted two hundred years ago and this is the first time it has flowered.

Bai Qian Qian's heart skips - although she did not know why. She thinks the peach blossoms are so beautiful.

I just love the metaphor of this - how Peach Blossom also represents Love Luck/Fate in Chinese and how after waiting for more than two hundred years, Ye Hua's wait is blossoming again - physically represented by the Peach Blossom tree he planted for Su Su years ago having its first blossom with Bai Qian Qian's return <3

I've gone too detailed in my summaries (haha), and I will finish the book in Part 3!